The North America aircraft fairings market will accelerate at a significant rate over the projected period. Increasing narrow-body aircraft deliveries in the U.S. will drive product demand in the region. North America reported around 3,500 narrow-body aircraft fleet in 2017, which are further expected to increase substantially by the end of the forecast period. Additionally, the region is also witnessing increasing investments in new-age aircraft in the military sector. Such trends are likely to create a need for product in North America over the coming years. 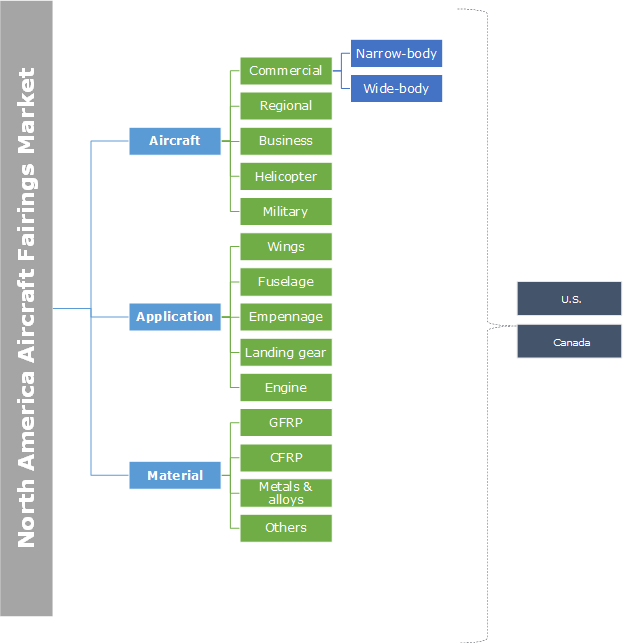 Presence of a wide range of aircraft manufacturers is expected to drive the regional share of aircraft fairings by 2026. Key airplane manufacturing companies have planned to expand their capacities in the U.S., which will further open new avenues for fairings manufacturers.

Technological advancements in the aerospace sector are expected to boost market growth rate over the forecast timeframe. The proliferation of Vertical Take-Off and Landing (VTOL) aircraft is one of the key advancements in aircraft manufacturing sector. These convertible aircraft are capable of developing an aerodrome network, which assists in locating hard-to-reach areas of any country. Such inventions may drive demand for aircraft fairing by the end of the forecast period.

The business jet segment will grow at over 3.1% CAGR over the projected period. The growth is mainly attributed to an increasing number of Ultra-High Net Worth Individuals (UHNIs) in the region. According to the wealth report, the U.S. reported more than 75,000 UHNIs in 2017, which is nearly one-third of the world’s UHNI population. The presence of UHNIs further increases the region’s buying propensity for private jets and small aircraft. Such trends will increase fairings demand in the North America business aircraft industry over the forecast period.

The landing gear segment will be holding more than 20% share in the market over the projected timeframe. Fairings are utilized to shield components of landing gear from high-speed alteration, which again helps in reducing noise from the landing gear system. Rising deliveries of commercial aircraft in the U.S., supported by regional air travel demand, is expected to drive product demand over the forecast period.

Metals & alloys will be accountable for lower share of global market over the projected timeframe owing to their limited usage in North America aircraft fairings market. Metals & alloys have been continuously replaced with lightweight materials, such as composites, to reduce the overall weight of the aircraft.

The North America aircraft fairings market is rapidly increasing owing to rising airplane deliveries and growing need for air transportation in the region. The availability of a large number of airplane companies together with increasing government investments to promoting new-generation aircraft is expected to drive product demand by 2026.

The Canada aircraft fairings market will also see a substantial growth by the end of the forecast period. In 2018, the country invested around USD 1.4 billion in aerospace research & development, which is five times higher than the amount invested in manufacturing R&D. Additionally, Canada also has a well-established manufacturing base for producing business jets, large jets, helicopters, etc., which further enhances their prominence in North America aircraft fairings industry.