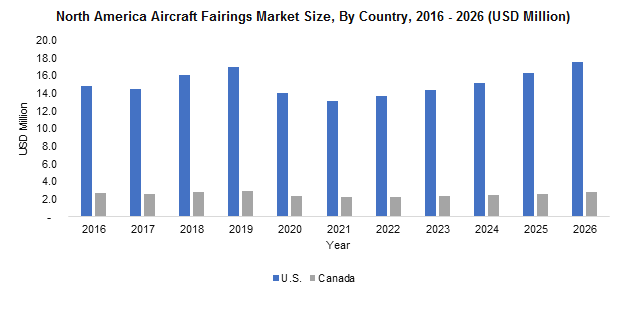 The proliferating air travel passengers demand in the U.S. is a key growth factor for the success of the North America aircraft fairings market from 2016 to 2026. According to the Bureau of Transportation Statistics (BTS), airlines operating in the U.S. carried more than 1 billion passengers in 2018, which is 4.8% more than the previous years. In 2018, the number of passengers on domestic flights were around 775 million, while the number of passengers on international flights were reported at approximately 233 million. Such trends have created a necessity for delivering a greater number of aircraft in the U.S., that will again drive aircraft fairings demand in North America.

The other factor enabling market growth is the rising number of aircraft deliveries in the U.S. In 2017, the number of civil aircraft sold in the U.S. were 2,808 units, which is around 5.9% higher than that of 2016. Additionally, the rising penetration of new generation and lightweight aircraft in this country will also stimulate growth of the North America aircraft fairings industry by 2026. In 2017, the U.S. Air Force has initiated New Generation Air Dominance (NGAD), which aims to enhance surveillance, persistence, and lethality across various military operations. The U.S. Air Force has also requested to increase the NGAD program budget to USD 1 billion by 2021. Such trends showcase a positive outlook for the new generation aircraft in North America, which will again enhance product penetration by 2026.

Although the North America aircraft fairings industry is propelling at a rapid rate, challenges associated with the ongoing pandemic are estimated to reduce regional market share in 2020. Key aircraft manufacturers have halted their production facilities across the U.S. The halt will further create an impact on aircraft deliveries by the end of 2020, which is estimated to decline demand for aircraft fairings.

The North America aircraft fairings market by application includes wings, fuselage, empennage, landing gear, and engine. Wings are projected to grow at the highest rate by 2026. Wings usually require mounting of two to three fairings per side. The increasing need for air travel and proliferation of lightweight aircraft will support the growth of aircraft wing fairings market demand by 2026.

Materials including Glass Fiber Reinforced Plastics (GFRP), Carbon Fiber Reinforced Plastics (CFRP), metals & alloys, and others are gaining significant attention in the aircraft fairings sector. GFRP is forecasted to hold more than 50% share by volume during the forecast period. GFRP is a lightweight, low maintenance, and high strength material, which is a key reason behind its higher utilization in aircraft fairings. Furthermore, the usage of composites in aircraft manufacturing is increasing at a rapid rate, encouraging growth of GFRP fairings over the projected period.

The North America aircraft fairings market will generate a revenue of more than USD 20 million by 2026. The proliferation of air travelers in the U.S. along with rising aircraft deliveries will stimulate industry development in the region. The presence of large-scale and top aircraft manufacturers in North America including Airbus, Boeing, Bombardier, Cessna, Embraer, etc., further creating opportunities for product manufacturers.

Get this research report on North America Aircraft Fairings Market customized according to your business requirements.