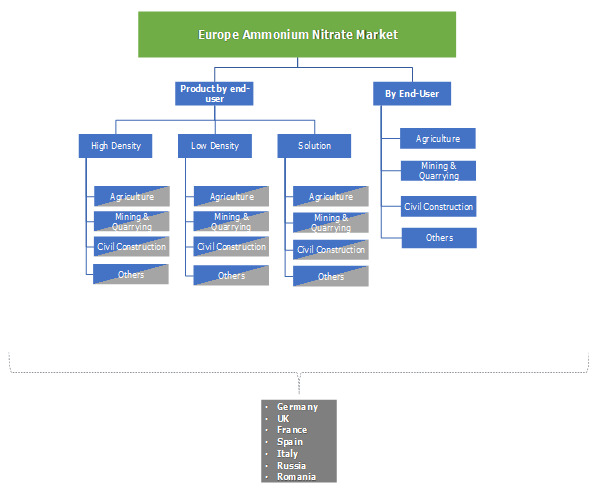 Europe ammonium nitrate market is poised to grow at a steady rate in coming years due to substantial development in the regional construction and mining sector. Europe will see a considerable growth in the mining sector owing to increased investments by major countries in the segment. Turkey has aimed for an annual investment of USD 10 billion for the energy & mining sector by 2023, reaching a value of around USD. Similarly, since the Finnish government has sanctioned investments of USD 266 million to recover nickel mining in the country in 2017, Boliden, the company engaged in Nickel mining in the country announced the expansion of its nickel operations by investing USD 47.6 million in late August 2020.

The European construction industry is growing at a significant rate due to economic development coupled with increasing urbanization. Increasing construction activities in major countries of Eastern Europe including Turkey, Russia, and Ukraine will prosper the regional demand for explosives. Siberia Power Gas Pipeline, Crimean bridge, several highways, etc., are some of the major ongoing construction and infrastructure projects in Russia. The country will also be the key construction market in the near future due to the growing needs for residential housing. The increasing mining and construction activities in Europe will create a demand for explosives in the upcoming years, which will further propel Europe ammonium nitrate market size.

Ammonium Nitrate Solution (ANS) is cost-effective, convenient in quality, and has a convenient range of temperature over long-distance transportation. The product used in the production of fertilizers and emulsion matrix. ANS is suitable for making solutions for the fertigation of foliar spray. The segment will grow at steady rate during the upcoming years owing to limited applications. Rising fertilizer demand is expected to drive Europe ammonium nitrate market demand over the upcoming years.

Other end-users, such as defense, pyrotechniques, etc., will have significant market share in Europe ammonium nitrate market. In military applications, the product is used to make explosives, such as daisy cutter bomb, and it is also used in amatol, which contains the mixture of ammonium nitrate, TNT, and aluminum. These mixtures are very effective in the application of rock blasting, underwater demolition, torpedoes, etc. The product is also used as an oxidizing agent in rocket propellants. Pyrotechniques compounds are used in the manufacture of fireworks, safety matches, oxygen candles, explosive bolts & fasteners, component of automotive airbags, etc. The product is used in pyrotechniques materials as an oxidizing agent. The rising usage of explosives in the end-user segment, such as defense, pyrotechniques, etc., will drive the revenue generation over the upcoming years.