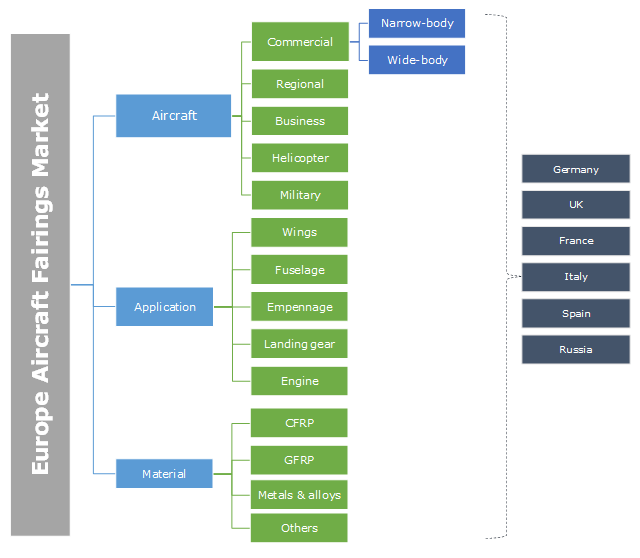 The flourishing travel & tourism sector in Europe will bolster Europe aircraft fairings market growth. According to World Tourism Organization (UNWTO), the total number of international tourist arrivals increased by nearly 50% between 2005 to 2018. Europe accounts for half of the world’s international travels. In 2018, France, Spain, Italy, Germany and the UK were among the top ten tourist destinations. In Europe, the tourism growth is primarily due to increasing popularity of Southern Mediterranean destinations. Many European governments are spending huge amounts of money to accelerate the growth of the tourism sector. In 2018, Germany, the UK, and France spent USD 94 billion, USD 76 billion, and USD 48 billion respectively on the tourism sector. This will trigger the manufacturing of new aircraft and related components, thereby supporting market expansion.

Strong economic growth, capacity fleet additions, and technological progressions will drive aerospace industry growth. There has been a continuous rise in average size of aircraft to accommodate the rising number of air travel passengers. The number of seats in an aircraft increased from 126 seats to 139 seats per flight over the last few years. The strong growth of long-haul flights will boost new aircraft additions, thereby driving the growth of aircraft components.

The wing segment will witness over 3.0% CAGR from 2020 to 2026. Wing fairing is a fillet attached to fuselage and wing root to minimize the interference drag. Fairings help in enhancing low speed and high load flying characteristics. The expansion of fuselage will increase the drag and reduce lift. Fairings used for wings aid in improving climb rate, glide ratio, and stability of the plane.

Glass Fiber Reinforced Plastic (GFRP) is likely to cross USD 6.5 million by 2026. Glass fiber reinforced plastic is highly durable and possesses low thermal conductivity. It can be molded into various complex shapes. Additionally, it is lightweight and can be quickly installed, requiring less structural framing.

The UK will grow at a CAGR of more than 2.5% during the forecast timeframe. According to the International Air Transport Association (IATA), air passenger traffic in UK is expected to increase by more than 33% by 2037. The UK government is spending huge amounts of money in research & development activities, which will improve aviation sector growth in the future. The UK government provided a funding of USD 5 billion for R&D activities in the aerospace sector. It has collaborated with aerospace technology institute & catapult centers and established supply chain improvement programs. The country is a major hub for aerospace manufacturing companies with the presence of nearly 3,000 industry players. Such trends will support the growth of Europe aircraft fairings market in the coming years.