Europe Ultrasonic Sensor Market size surpassed USD 450 million in 2020 and is predicted to showcase around 10% growth rate between 2021 and 2027. 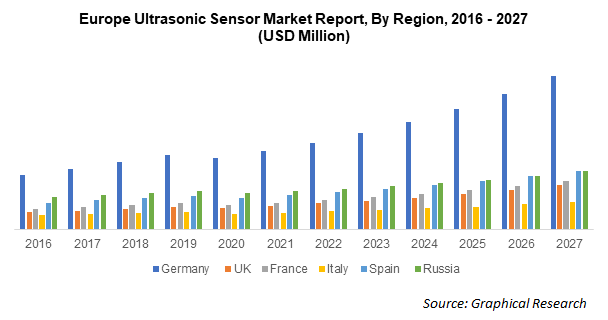 The market growth is attributed to the presence of major automotive OEMs including BMW Group, Audi, Volkswagen, etc. These OEMs are focusing on the development of autonomous cars and ADAS systems. ADAS systems, such as forward collision avoidance systems, automated emergency braking, and autonomous park assist, are highly incorporated with ultrasonic sensors.

The COVID-19 crisis is expected to witness a rise in automation and robotics in industries, such as chemical, pharmaceutical, automotive, aerospace, and defense, to reduce dependency on the human workforce in the European region. The implementation of robotics, automation, and advanced sensors is enabling enterprises to sustain their manufacturing & production capacity with minimum interventions, risks, and exposure of workers to the coronavirus. The manufacturers in the European region are deploying industrial robots, Automated Guided Vehicles (AGVs), and IoT solutions in their plant facilities. These solutions are equipped with ultrasonic sensors for process control applications.

The through beam ultrasonic sensor market in Europe will expand at a CAGR of 13.5% during the forecast timeframe, owing to their rising adoption in assembly line, pick & place, conveyor belts used in oil & gas, pharmaceutical, and food & beverage industries.

The through beam sensors are more powerful than retroreflective sensors as they are available with a large sensing range and a short response time. These sensors are incorporated with both receiver and transmitter in two separate housing, increasing their accuracy and precision with minimum error margin. These features will increase the adoption of the through beam ultrasonic sensors in detection and counting of objects and monitoring of transparent objects in industrial applications.

Companies are adopting several market strategies including new launch of sensors, partnerships & acquisitions to gain a high competitive edge over rivals. For instance, in March 2021, Balluff GmbH launched the new inductive IO-Link sensors with extended switching distance. With the switching distance up to 11mm, they can send warning signals even if output leaves the detection range. The new launch will extend the inductive sensor line of the company.

Get this research report on Europe Ultrasonic Sensor Market customized according to your business requirements.