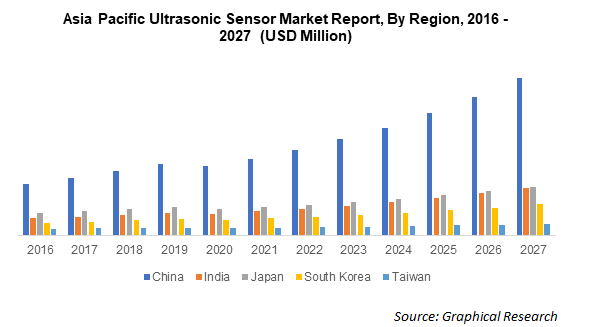 The through beam segment will record over 14% growth rate during the forecast period. The growth is driven by the numerous high-end features offered such as shorter response time, large transmission range, and accurate proximity sensing. It is used with both a receiver and transmitter to increase accuracy & precision by reducing error margin.

Several market players are extensively focusing on expanding their product portfolio to cater to the high market demand. For instance, in February 2021, CUI Group announced the addition of an ultrasonic sensor series to its product portfolio. The product line consists of through beam sensors with beam angles ranging from 75 to 80 degrees and distance ranging from 0.2 to 18 meters.

India ultrasonic sensor market will grow at 12% CAGR through 2027, attributed to the rising government initiatives and investment efforts to improve consumer electronics production and sales in the region. For instance, in September 2020, the Indian government launched the Production Linked Incentive (PLI) scheme. Under this scheme, the government will provide USD 23 billion to promote the establishment of manufacturing facilities for consumer durables and electronic devices in the country.

To maintain a competitive advantage, companies are boosting their investments in new acquisition & merger strategies. For instance, in November 2021, Toposens partnered with Infineon Technologies to develop 3D collision avoidance and obstacle systems for autonomous vehicles. The company will supply 3D ultrasonic sensors to allow the development of cost effective, robust, and accurate 3D vision for autonomous vehicles and robotics, whereas Infineon will offer MEMS technology-based microphones to detect sound waves to identify the position of 3D objects through ultrasounds.

Get this research report on Asia Pacific Ultrasonic Sensor Market customized according to your business requirements.