Asia Pacific Joint Reconstruction Devices Market size crossed USD 3.2 billion in 2020 and is predicted to observe around 7.9% growth rate between 2021 and 2027.

Joint reconstruction devices are medical devices that offer fixation for the bone and support the damaged or diseased bone structures. The joint surfaces are replaced using these devices and they also assist the surgeons to fix and strengthen the damaged joints. Joint replacement devices are used in multiple areas to fix the damaged knee, hip, ankle, shoulder, and finger joints in patients. The design of joint replacement prosthesis is based on the specific load transfer capabilities of the joint. 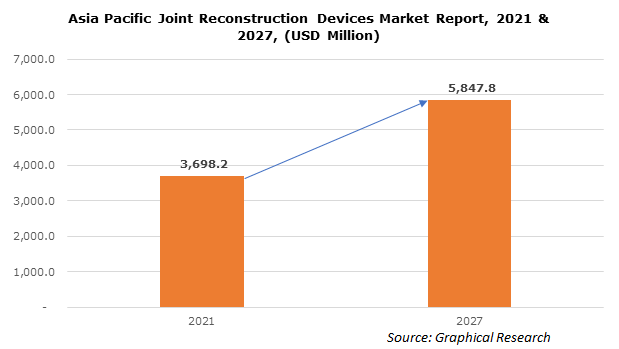 The rising geriatric population in emerging markets will drive the Asia Pacific joint reconstruction devices market growth. The region is witnessing rapid population changes, with majority of the countries across the region aging at an unprecedented pace. According to the United Nations Report, in 2016, around 12.4% of the region’s population was aged 60 years and older. The recent projections expect this number to increase significantly and reach to 1.3 billion by 2050. This notable increase in the geriatric population is due to several factors including rapidly declining fertility rate, steadily increasing life expectancy, improving healthcare services, etc. The elder adults face a broad range of health concerns including orthopedic ailments and are at higher risk pertaining to disabilities with declining functional ability. With rising age, musculoskeletal tissues experience bone fragility, loss of cartilage resilience, low ligament elasticity, loss of muscular strength, and fat redistribution that limits the ability to carry out their daily functions. These factors are resulting in arthropathies & fractures in elderly population and drives the mortality rates.

The increasing volume of hip replacement surgeries is expected to boost the Asia Pacific joint reconstruction devices market revenue. This increase is attributed to the soaring number of accidents and traumatic incidents, surging prevalence of hip & knee ailments, and extensive target population in the region. These factors have boosted the number of replacement surgeries performed every year. Continuously increasing rate of infection that promotes hip, shoulder, and knee revision procedures are set to further increase the demand for joint reconstruction procedures. Furthermore, the growing awareness regarding joint reconstruction surgeries and other orthopedic procedures has substantially increased in past few years.

The knee replacement segment dominated around 50% market share in 2020, owing to the rising prevalence of disorders including osteoarthritis, osteoporosis, and others causing knee ailments, rapidly aging population, etc. The population in developing countries is aging at an unprecedented rate in comparison to higher income countries and estimates suggest that it is expected to represent 80% of elderly population by 2050. The notable drop-in birth rate and surge in life expectancy contributes to the rapidly aging population across the Asia Pacific region.

Based on the ethnicity, the reported prevalence of knee associated disorders was 44.6% in Malays, 23.5% in Chinese, and 31.9% in Indians. The occurrence of two or more non-communicable diseases promoted the risk of knee pain among the Indians. This significant prevalence of knee pain and disorders is set to promote the adoption of knee replacement devices for corrective surgeries in various countries.

China joint reconstruction devices market revenue will exceed USD 1,855 million by 2027. This considerable revenue growth is due to the high elderly population, rising prevalence of musculoskeletal disorders, and increasing life expectancy in the country. The considerable presence of co-morbidities such as obesity, geriatric populace, physical inactivity, and others majorly contribute to the surging prevalence of orthopedic and musculoskeletal disorders.

According to a published research study, from 2018-2020, the prevalence of work-related musculoskeletal disorders (WMSDs) in China was around 56.5%–88.7%. The occupational population reported pain associated with neck, shoulders, elbow, knee, and ankle joints, etc. In 2019, the Healthy China Action (2019–2030), the national health action plan in China also incorporated the WMSDs and proposed strategies to curb the prevalence. Such developments coupled with supportive policies is set to facilitate the market growth in China.

These players are adopting several organic and inorganic strategies including new product development, mergers & acquisitions, and partnerships for gaining maximum revenue share and strengthening their market presence. For instance, in March 2021, Meril Healthcare and Curexo, Inc. collaborated to develop CUVIS Joint, an active robotic knee replacement system. This collaboration will help the company to fasten the product development process and gain competitive advantage over the competitors.

Get this research report on Asia Pacific Joint Reconstruction Devices Market customized according to your business requirements.