Significant upsurge in the prevalence of orthopedic injuries is anticipated to promote the adoption of joint reconstruction devices. The incidence of osteoporosis and osteoarthritis is another major health concern affecting substantial proportion of elder adults. With augmented use of hip, ankle, knee, and shoulder replacement procedures among other orthopedic surgeries, the demand for these devices is expected to increase significantly. 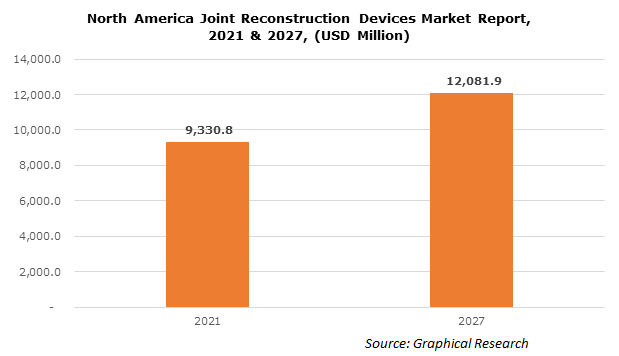 The rapidly aging population in the U.S. is estimated to proliferate the use of joint reconstruction devices. The key impact rendering factor behind the aging population in the U.S. is the baby boomer’s population. Amongst one of the largest generations in the country, boomers have a substantial share in the population. As per the U.S. Census Bureau, the boomers are set to expand the elderly population and increase from 15% in 2018 to 21% by 2030. By the year 2060, approximately one in four Americans is expected to be aged 65 years and above, with the number of adults aged 85 and over set to triple. Older adults are reported to be increasingly susceptible to orthopedic injuries and disorders. Increased medical comorbidities & reduced physiological reserve, morbidity, and mortality post-orthopedic trauma is significantly higher in patients aged 70 years and older.

U.S. joint reconstruction devices market value was more than USD 7,976 million in 2020, due to the increasing geriatric population, surging healthcare expenditure, and the rising prevalence of orthopedic disorders in the country among others. Furthermore, prominent market players including Stryker Corporation, Johnson & Johnson, and Zimmer Biomet are implementing strategic initiatives including new product launches that will further increment the use of joint reconstruction devices.

These companies are adopting several strategic formulations including product launches and partnerships for channelizing maximum revenue share and bolstering their industrial position. For instance, in April 2021, Zimmer Biomet announced the U.S. FDA 510(k) clearance for its ROSA Partial Knee System for robotically-assisted partial knee replacement surgeries. This system is a part of ROSA Robotics, a multiple application robotics platform for neurosurgical & spine procedures and utilizes a suite of advanced digital and robotic technologies. This approval will help the company in expanding their knee replacement portfolio and drive product sales.

Get this research report on North America Joint Reconstruction Devices Market customized according to your business requirements.