North America Growth Hormone Market size surpassed USD 1.3 billion in 2020 and is predicted to witness 7% CAGR from 2021 to 2027. Improving diagnosis rate for growth hormone disorders will augment the market demand. According to American Academy of Paediatrics’ report, growth hormone deficiency occurs one in 10,000 children in the U.S. 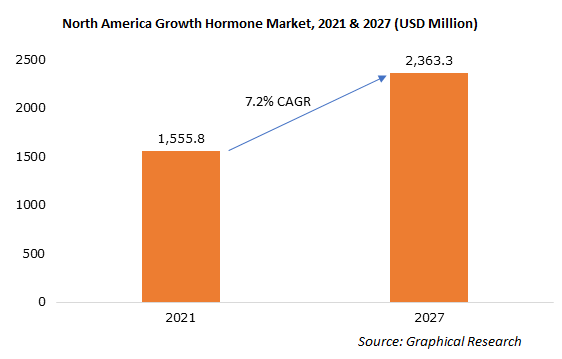 The powder segment in the North America growth hormone market accounted for over USD 986 million revenue in 2020. The most common form of growth hormones is powder form. These growth hormones are available in the form of lyophilized powder. These powder forms are then formulated in various concentrations of suspension to develop dosages for growth hormone injections.

In patients with disorders such as Turner syndrome, growth hormone deficiency and idiopathic short stature among others, the suspension is injected subcutaneously. Pfizer is one of the leading suppliers of Genotropin growth hormone in powdered form. 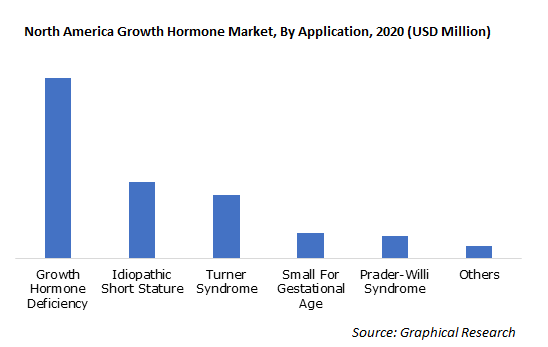 Turner syndrome segment will observe around 7.4% growth rate during the forecast timeline. The growth is attributed to rising incidence of Turner syndrome worldwide. According to the National Organization of Rare Disorders, around 70,000 girls and women in the U.S. are estimated to be affected by Turner syndrome and it is estimated to affect nearly one in 2,000-2,500 live female births. Turner syndrome occurs if the X chromosome is missing in females, resulting in delayed shorter-than-average height and puberty. Growing disease awareness and increasing adoption of synthetic growth hormones will accelerate the segment growth.

In addition, growing healthcare expenditure coupled with advanced medical infrastructure are some of the factors pushing the segmental expansion. Additionally, presence of large number of hospital pharmacies in the region will also contribute to the industry progression.

North America growth hormone market revenue valued at USD 1.3 billion in 2020, due to growing patient awareness and high disposable income in the region. Besides, the regional market demand is credited to the increasing sale of GH injections for treatment of various growth disorders.

These companies have adopted various strategies such as product launches, collaborations, distribution agreements, and acquisitions that have helped them in sustaining the market competition and gain significant position in the market. For instance, in November 2020, Aeterna Zentaris Inc. amended the existing license agreement with Novo Nordisk to expand the usage scope of macimorelin that aids in diagnosing childhood onset growth hormone deficiency. This strategic move helped the company to enhance their revenue growth.

Get this research report on North America Growth Hormone Market customized according to your business requirements.