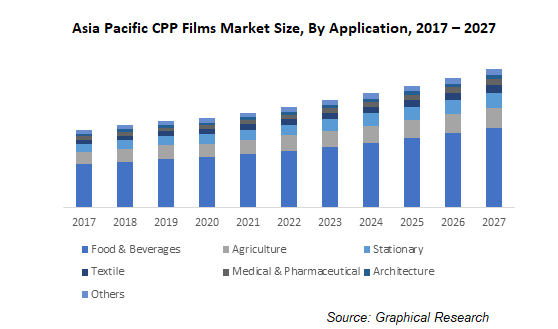 The rising demand for CPP films in the stationary industry will also contribute to the overall industry revenue. According to UNICEF, the Asia Pacific region includes one-third of the global population and more than one-quarter of the global children, around 580 million children in total. The education of the population in these regions will sustain the stationery industry in the future and will drive the market for laminated paper products. 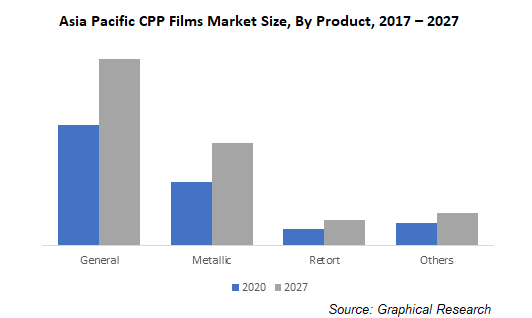 Asia Pacific is the largest consumer of CPP films due to the presence of large number of food processing companies especially in China, Japan, and India. Additionally, the significant growth in the pharmaceutical sector within the region will complement the industry growth. For instance, according to the Indian Economic Survey 2021, the domestic pharmaceutical sector in India was around USD 42 billion and is expected to reach USD 65 billion by 2024 and further expand to reach approximately USD 120-130 billion by 2030.

The market size for cast polypropylene films in the Asia Pacific was over USD 634 million in 2020 and will grow at a 6.5% CAGR over 2021-2027 due to the strong presence of a vast number of food processing companies in China, Japan, and India.
Cast polypropylene (CPP) films are low-density, cost-effective, high-performance, and transparent films that are extensively used in the medical, food packaging, and textile industries.
Demand for 20–30 micron thick CPP films in APAC accounted for more than 51% of the market share in 2020 and will grow with higher adoption in food packaging.
The food & beverage applications recorded more than 55% of the APAC market share in 2020 with the surging need for high heat resistance and excellent packaging integrity at extreme temperatures.
Some of the leading market players in APAC include Tri-Pack Films Limited, Mitsui Chemicals Tohcello, Inc., 3B Films Private Limited, Uflex Limited, Profol Group, Polyplex, Jindal Poly Films Limited, and Cosmo Films Limited.
Customized Report  Request Free Sample
Inquiry Before Buying  Request Free Sample