Europe Electric Bus Market size crossed USD 950 million in 2020 and is anticipated to expand at a CAGR of 23% from 2021 to 2027. The increasing focus of European manufacturers on boosting the production of electric vehicle batteries will drive the market growth. Several European companies are focusing on R&D associated with EV batteries to launch innovative solutions. 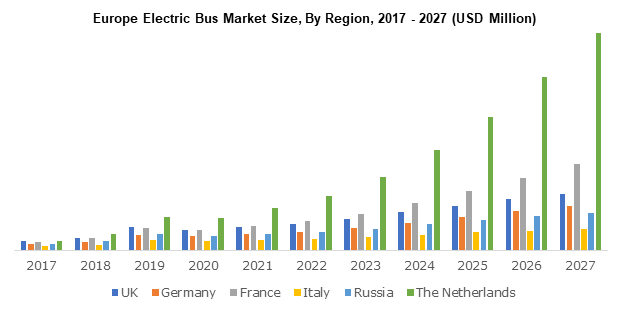 The EU government has announced plans to create several new jobs as industries are increasing their capacity to supply lithium-ion batteries needed for electric vehicle production. Planned giga-factories across Europe will produce between seven million to eight million batteries annually. The government aims to significantly increase the production of e-vehicle batteries by 2025. To uplift local firms, the European Commission has approved around USD 3.5 billion in funding in 2020 for the electric-vehicle battery supply chain.

The PHEV electric bus market in Europe will register steady growth during the forecast period. Plug-in hybrid buses run on a combination of electric and diesel/gasoline engines, providing them with an enhanced range in terms of kilometers. The low cost of these buses compared to all-electric, and FCEVs will augment their market representation.

Industry players are adopting several strategies, such as mergers & acquisitions, and partnerships. For instance, in November 2020, Ebusco partnered with Rocsys, a supplier of plug-in robots, for the automation of its bus depot project. The bus depot automation through robotization was expected to be in service by April 2021. Companies are also focusing on new bus launches to increase their revenue share and expand their market presence.

Get this research report on Europe Electric Bus Market customized according to your business requirements.