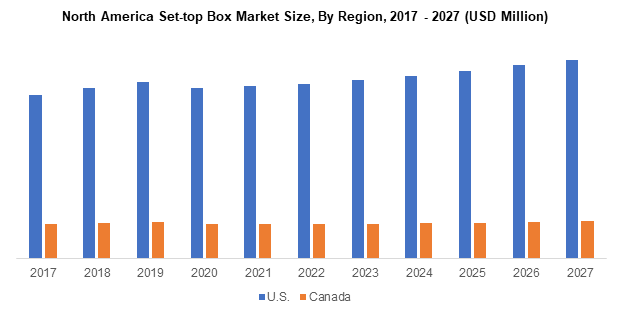 The proliferation of internet services and broadband along with rising preference for HD channels and on-demand content will accelerate the market demand. The evolution of technology in the digital arena and introduction of flat-screen OLED TV have played a pivotal role in changing TV viewership trends. Introduction of IPTV set top box owing to the positive industry outlook of OTT platforms, such as Netflix, Hulu, Amazon Prime, and Disney + Hotstar, will contribute significantly to the market revenue.

DVR set-top boxes are designed with interactive features such as video-on-demand, real-time program recording, and electric program guide. The integration of advanced features will support its adoption over the forecast period. TV service providers, such as Verizon, TataSky, and Airtel, offer a variety of DVR set-top boxes that can record TV programs to be watched at a later date and time. High convenience offered by DVR set-top boxes will boost their demand in the market.

Get this research report on North America Set Top Box Market customized according to your business requirements.