North America Radar Sensor Market size exceeded USD 2.5 billion in 2020 and is predicted to expand at a CAGR of 15% from 2021 to 2027. The market growth is owing to the rising adoption in surveillance or high-end security systems such as intrusion detector at airports, power grid security systems, prison perimeter surveillance systems, and others.

The increasing crime rates, growing security concerns, and strict legal provisions are various factors driving the demand of the radar sensors in video surveillance system, building security, among others. These sensors are used for detecting, tracking, and locating the objects at a considerable distance and offer reliability with high resistance to environmental conditions. In January 2021, IEE launched its first VitaSense solution for interior radar sensing of unattended child detection (UCD) in vehicles. It helps in detecting the movement of a newborn baby in a car and preventing tragic hot car deaths with the help of surveillance assist.

The long-range radar sensor market will observe around 12% growth rate during the forecast period due to its rise in adoption in the aviation & defense industry for reconnaissance, monitoring the activities on the ground, air, and at sea. These radar sensors are used for various military applications such as ground surveillance, air traffic control, missile control, moving target indication, and provide important information about the unknown areas.

The growing external tensions, increasing external threats, and need for enhancing nation security systems are some factors driving the growth opportunities for the market. In February 2021, Numerica launched Spyglass, a new 3D radar solution designed to fill the need for Counter Unmanned Aircraft Systems (C-UAS) detection and track performance in a broad range of applications such as border surveillance, air space monitoring, facilitating security, and more. 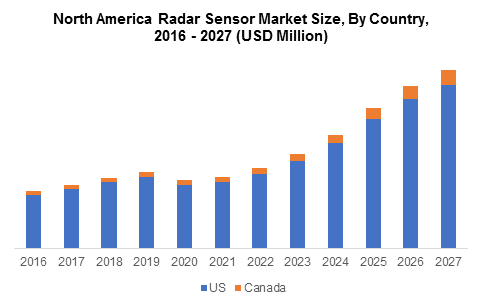 Canada held a North America radar sensor market share of over 5% in 2020 and will grow at more than 18% CAGR through 2027.  The growth is attributed to rising government initiatives and funding to accelerate space industry in the region. Increase in space activities in the region will increase the adoption of radar sensors in satellites for various applications such as observation and surveillance of earth atmosphere, observation, and surveillance of earth surface (such as land, sea) and others.

These companies are focusing on developing technically advanced products, which will help them to maintain their dominating position among their competitors. For example, in August 2019, Continental company launched its new short-range radar that offers precise detection of vehicle surrounding including speed and movement. This radar operates 77 GHz detecting environment at high resolution and better accuracy.

Get this research report on North America Radar Sensor Market customized according to your business requirements.