The market demand is due to regional growth of aerospace and defense sector. The aerospace & defense industry is extensively adopting radar sensors for various applications such as air & terrestrial traffic control, anti-missile system, air-defense system. Rising government expenditure on military & defense budgets to strengthen the defense power will add an advantage for Asia Pacific radar sensor manufacturers. For instance, in December 2020, Japanese Cabinet announced a budget of USD 51.7 billion for the regional defense sector for FY2021. The government is more inclined to add new fighter jets and missile systems to seek counter potential threats from North Korea and China.

The companies are continuously involved in new innovations to increase the sensing range and to enhance their adoption in advanced UAV systems. For example, in September 2018, Ainstein developed Ultra-Long-Range UAV radar sensor series which are capable of precision detection of more than 1,000 meters away. 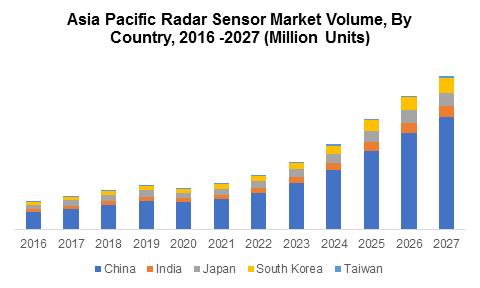 China radar sensor market size is poised to register 20% growth through 2027. The regional growth is attributed to rising adoption of robotics and automation in manufacturing and processes industries in the country. For instance, China accounted for the installation of 140,000 industrial robots in 2019, which were 37.6% of the total robot sales across the globe. The industrial robots are integrated with radar sensors for velocity, movement, and distance measurement applications.

Companies are focusing on continuous innovations and new product launches to gain a competitive edge in the market. For instance, in December 2020, Infineon Technologies AG developed autonomous 60 GHz radar sensor MMIC for motion sensing applications. The new radar is based on Antenna-in-Packaging (AiP) technology and can autonomously detect a human target up to 5 meters with low power consumption of less than 5 mW. The new product launch will enhance the company’s product offerings in the market.

The market for radar sensors in Asia Pacific generated USD 4 billion in 2020 and could grow at an 18% CAGR over 2021-2027.
Imaging radar segment captured more than 60% market share in 2020 and will expand at a 20% CAGR due to increasing adoption in autonomous driving systems such as ADAS.
Long-range radar sensors captured over 30% market share in 2019 and should grow at a 16% CAGR through 2027.
The industry share for radar sensors in China could expand at a CAGR of more than 20% during the forecast period 2021-2027.
Customized Report  Request Free Sample
Inquiry Before Buying  Request Free Sample