Europe Air Traffic Management Market size surpassed USD 1 billion in 2020 and is anticipated to register a growth rate of 3% between 2021 and 2027.

Partnerships and collaborations between industry players are driving the air traffic management market expansion in Europe. In August 2019, Eurocontrol and Sesar came together to validate two new techniques to enhance the air traffic management and runway capacity. Static pairwise separation for departures and dual threshold for landing are among the two techniques, which are jointly tested by these organizations. 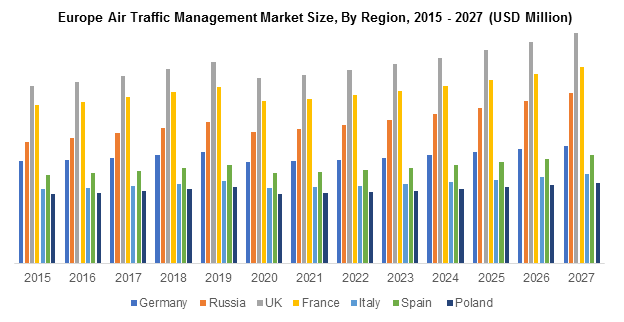 Market players and government authorities in Europe are actively forming partnerships and collaborations for the implementation of advanced air traffic management systems on airports. For instance, in December 2019, the SESAR Deployment Alliance members including the EUROCONTROL Network Manager, air navigation service providers, air space users, and airports proposed to sign a partnership agreement that will allow the management of digitalization and modernization of air traffic management systems in Europe.

The air traffic management market in Europe witnessed a temporary slowdown due to the impact of COVID-19 pandemic on the commercial aviation sector. Several European countries including the UK, Italy, and Spain witnessed severe impacts of the pandemic in terms of loss of lives and economic recessions. To curb the spread of the virus, these countries imposed a ban on international air travel, adversely affecting the market growth. For instance, in December 2020, the UK government imposed a ban on flights arriving from India.

Europe has been on the forefront in technological advancements in the field of air traffic management over the past three years. There are more than 30 players across the region competing for 406 airports, providing ATC services. Increasing number of players with rapidly growing market competitiveness has led to the development of advanced technologies and latest systems in the ATM industry. The regional market growth is also supported by the establishment of stringent regulations with respect to air traffic management across the region.

The hardware segment will have the ability to capture a significant Europe air traffic management market share through 2027 owing to its growing importance in the collection of real-time data at airports. The development of new hardware components with advanced technology is further enhancing the segment growth. For instance, in March 2019, Raytheon began testing its newly developed next-generation radar for the U.S. Navy, EASR (Enterprise Air Surveillance Radar) that would be equipped with warships and aircraft carriers to provide air traffic control capabilities along with electronic protection for anti-surface & anti-air warfare.

The navigation hardware is a key element in air traffic management and is attributed to record moderate growth during the forecast period due to its ability to safely guide aircraft in air and on the ground. The navigation applications include precision landing and Performance-Based Navigation (PBN). Several factors, such as ensuring a safe landing during low visibility conditions, are expected to drive the navigation segment growth.

Companies are focusing on partnerships and collaborations to enhance their market share. For instance, in April 2019, Frequentis AG collaborated with DFS, a German air navigation service provider, to develop a remote air control tower, which is stationed at Saarbrücken airport and has the largest scale of operation across the globe.

Get this research report on Europe Air Traffic Management Market customized according to your business requirements.