Asia Pacific Air Traffic Management Market size crossed USD 1 billion in 2020 and is predicted to record a CAGR of around 4% from 2021 to 2027. 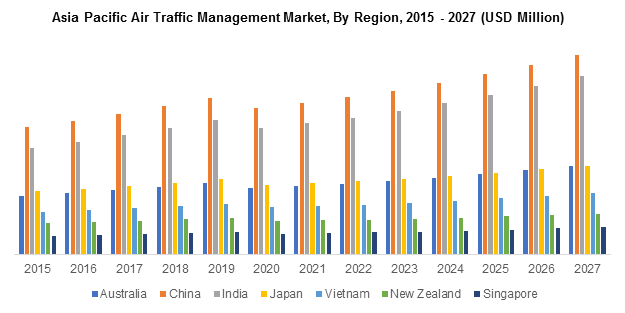 The market for air traffic management in Asia Pacific witnessed severe impacts of the COVID-19 health crisis during 2020. Several countries completely banned air travel from China due to the origin of the virus in the country. Similarly, the imposition of strict lockdown and restrictions on domestic and international air travel in India and Japan, hampered the industry size. The ATM market in Asia Pacific is anticipated to witness a steady growth with gradual stabilization of the civil aviation industry in the region.

Increasing investments, liberalization of regulations, and airspace co-ordination are among the major drivers propelling the air traffic management market in Asian countries. The Asia Pacific region gained an investment of over USD 30 billion between 2016 and 2019 for the development of aerospace and civil aviation sectors. Policies, such as 100% FDI in aviation under automatic routes, were introduced in India in 2018 and are supporting the market development of air traffic management systems.

The components required for air traffic management systems are distributed by number of hardware and software providers. The component segment is anticipated to have high growth potential in the market during the forecast timeframe due to the increasing demand for technologically advanced ATMs. The modernization of airports along with the rising airspace congestion and subsequent demand for advanced air traffic infrastructure is the key feature boosting the growth of the market.

The surveillance segment will display a strong growth through 2027 due to the growing requirements for better management of traffic at airports. The industry players are engaged in partnerships, collaborations, and agreements to install technologically advanced air traffic surveillance systems at airports. In July 2019, the Airport Authority of India signed a contract with Aireon LLC to install air traffic surveillance services in Mumbai, Kolkata, and Chennai ocean airspaces to cover an area of over six million square kilometers.

Partnerships and collaborations are among the key strategies adopted by market players to enhance their market share and gain a competitive advantage. For instance, in May 2018, Saab AB partnered with Airservices Australia to install Aerobahn in Brisbane, Perth, Melbourne, and Sydney. Aerobahn is a collaborative decision-making platform that helps airports to improve their operating efficiency.

Get this research report on Asia Pacific Air Traffic Management Market customized according to your business requirements.