The growth of automation, such as industry 4.0 and Industrial internet of things (IIoT), is expected to increase the demand for optical sensors. These sensors are used in automation to provide valuable information at various levels, helping companies to improve the production process. These optical sensors are also witnessing significant adoption from industrial robots, which require data that ensures intelligent control and decision making for various manufacturing processes. The increasing adoption of industrial robots in the regional manufacturing industry will fuel the market expansion. According to the International Federation of Robotics, the operational stocks of industrial robots in Europe reached 580,000 units in 2019, with an increase of 7% from the previous year.

The image optical sensor market held around 68.5% revenue share in 2019 and will expand at 9% CAGR during the forecast period. The growth is attributed to its increasing adoption in smartphones, cameras, and various home automation devices. Image sensors offer high sensitivity, and can detect small target, driving their demand in consumer electronics applications. To cater to high demand among smartphone manufacturers, the market players are continuously innovating new products with improved pixel size and compact feature. For example, in September 2020, Samsung Electronics announced the launch of its new image sensor with 0.7μm pixel size in smartphones. 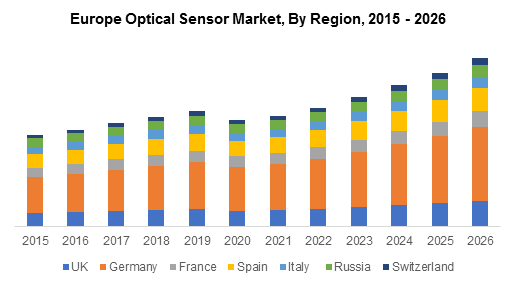 Germany optical sensors market is predicted to grow at a CAGR of 9% through 2026 due to the increasing adoption of autonomous technology in vehicles that require various optical sensors for driver monitoring and advanced safety applications. Also, increasing government support toward the development of autonomous driving technology will boost the market growth opportunities. In February 2021, German Federal Government announced to draft a bill for Level 4 autonomous used in public traffic. This has positively influenced various automotive OEMs to accelerate their development for autonomous technology, propelling the adoption of optical sensors in the region.

Get this research report on Europe Optical Sensor Market customized according to your business requirements.