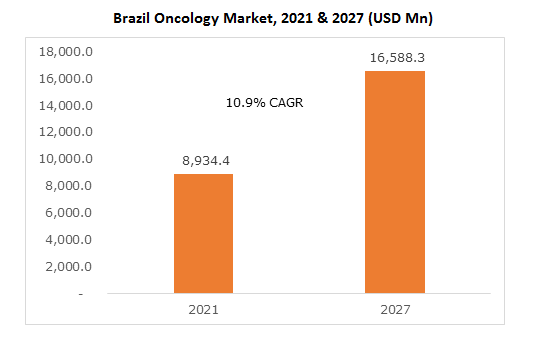 Large population of Brazil is suffering from chronic conditions such as diabetes and cancer coupled with growing adoption of unhealthy diet will spur the Brazil oncology industry demand. For instance, according to the World Health Organization (WHO) report, around 600,000 new cancer cases were reported in Brazil by the end of 2020. Also, the report stated that, the nearly 1.5 million new cases estimated to be reported annually by 2030 if the current trend and conditions prevail. In addition, the country reported nearly 260,000 deaths in the same year with cancer making it the most common cause of death.

Further, technological advancements and automation have made tests more accurate and easier to perform. For instance, Liquid based cytology (LBC) tests were developed to overcome difficulties in conventional pap test for cervical cancer screening. This LBC test reduces specimen inadequacy by around 80% thus allowing further application in chlamydia, HPV, and gonorrhea testing.

The cancer diagnostic segment accounted for over USD 4.4 billion in 2020, attributed to the rising prevalence of cancer in the country. Moreover, government initiatives to increase awareness regarding early detection of cancer or malignancy will fuel the demand for various diagnostic procedures. Furthermore, the adoption and demand for cancer diagnosis has increased in recent years, as few of the tests including biomarker tests are cost effective as compared to other diagnostic methods such as medical imaging.

The private segment size crossed USD 4.9 billion in 2020 owing to the increasing number of cancer cases treated in the country. For instance, as per the Brazilian Breast Cancer Economic Assessment and Impact report, around 47% of stage two breast cancer cases are treated in Sao Paulo City of Brazil.

Companies engage in different organic and inorganic growth strategies to establish and strengthen their market presence in the region. The companies strive to gain competitive advantage in the market while also enhancing their industry share. For instance, in January 2020, Merck partnered with Taiho Pharmaceuticals and Astex Pharmaceuticals to develop small molecule inhibitors against the KRAS oncogene and several other drug targets. This strategy is expected to increase the revenue of the company and maintain long term business relations.

How will oncology market fare in Brazil?
The industry share for oncology in Brazil exceeded USD 7.9 billion in 2020 and will grow at a CAGR of 10.9% between 2021 and 2027.
What factors will increase the share of cancer diagnostics to Brazil oncology sector?
Cancer diagnostics accounted for a revenue of USD 4.4 billion in 2020 and will record lucrative growth due to the surging prevalence of cancer in the country.
Why will breast cancer account for a substantial value of the Brazil oncology industry size?
Breast cancer will register a valuation of USD 3.3 billion through 2027 on account of rising prevalence due to hormone imbalance, obesity, replacement therapy, and age-related risks.
What are leading players in the Brazil oncology landscape?
Major participants in the Brazil industry are Pfizer, Thermo Fischer Scientific, Abbott, Janssen Diagnostics, LLC, Bayer AG, GE Healthcare, Merck, and others.

Get this research report on Brazil Oncology Market customized according to your business requirements.