Cannabidiol occurs naturally in the resinous flower of cannabis. Cannabidiol is a compound derived from hemp and marijuana plants and is used for medicinal purposes. With its proven capabilities to treat a variety of disorders including chronic pain, neurological pain, anxiety, sleep disorder, as well as nausea and stress, cannabidiol is gaining significant popularity among users in the region. As cannabidiol offers a variety of therapeutic advantages, it is also noted to be non-intoxicating. 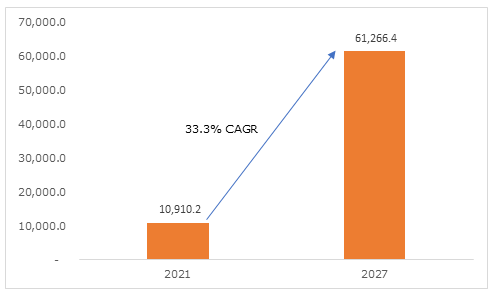 As several studies observe the potential advantages of CBD in different fields of medicine, two factors largely contribute to its increasing prominence in the region. The supportive regulatory framework and the wide acceptance from consumers. North America accounts for the largest CBD market across the globe due to its liberal regulatory stance on cannabis products. The introduction of Farm Bill in 2018 legalized virtually every CBD product with less than 0.3% THC content across states in the U.S.

Further, as it also redefined hemp and hemp-derived products, the policy boosted the North America cannabidiol market demand. However, any other THC composition above 0.3% is considered illegal at a federal level, different states have devised state-level policies to decriminalize the possession and consumption of CBD products.

The increasing popularity of CBD products among consumers is noted due to the large-scale online advertising of the products. With U.S. and Canada being one of the most technologically advanced countries, consumers are highly aware of the advantages of CBD products and the legal framework surrounding the same.

The oil segment accounted for over USD 1 billion in 2020. CBD oil is noted to be largely consumed in the region owing to its widespread benefits for pain related ailments. Another area where CBD oil is witnessing a significant traction from is its growing demand for the treatment of mental disorders such as anxiety and depression.

According to The National Institute of Mental Health (NIMH), U.S. Department of Health and Human Services, the prevalence of major depressive episode among U.S. adults peaked at over 7.1% in 2017. Depression and anxiety are identified as major health concerns in the country and medications, particularly CBD-derived medications, are increasingly prescribed to the patients.

The chronic pain segment in the North America cannabidiol market is anticipated to reach USD 20.6 billion by the end of 2027. CBD products are noted to offer better results for chronic pain when compared to its opioids counterparts. With negligible toxicity and minimal side effects, CBD-derived products are highly gaining prominence as an alternative medication.

North America hemp-derived CBD products are noted to witness relatively smoother regulatory hurdles as the THC content is naturally well within the acceptable limits. The segment is estimated to dominate around 70.8% of the North America cannabidiol market share by 2027 due to the negligible THC content.

The offline segment will expand at a CAGR of 32.6% through 2027. The growth can be attributed to the higher consumer reliance on offline purchases as compared to online channels. Further, offline mode of distribution also allows a smooth monitoring of CBD products. As the market is in its initial phases, the offline distribution channel is poised to account for a larger North America cannabidiol (CBD) market proportion while its online counterpart is expected to expand with a relatively higher CAGR.

U.S. cannabidiol market revenue was over USD 3.8 billion in 2020 and is expected to show significant growth of 33% till 2027. As the U.S. FDA continues to review drugs for approval for the treatment of a variety of disorders, a considerable patient pool is added to the existing patients, potentially expanding the size of the market.

Additionally, with increasing prevalence of diseases, the adoption of CBD products has witnessed an exponential growth in the country in the recent years and a similar trend is expected to fuel the regional market.

Companies engage in different organic and inorganic growth strategies to establish and strengthen their market presence in the region. The companies strive to gain competitive advantage in the industry while also enhancing their market share. For instance, in April 2021, The Valens Company announced that it has entered a definitive agreement to acquire Green Roads for nearly USD 60 million. The acquisition grants The Valens Company access into the U.S. market through a well-developed network of Green Roads.

Get this research report on North America Cannabidiol (CBD) Market customized according to your business requirements.