North America Current Sensor Market size valued at USD 800 million in 2019 and is projected to register growth of over 6% from 2020 to 2026. Rising trend of industrial automation will drive the demand for current sensors in predictive maintenance and measurement of severe operating conditions in industrial machinery. 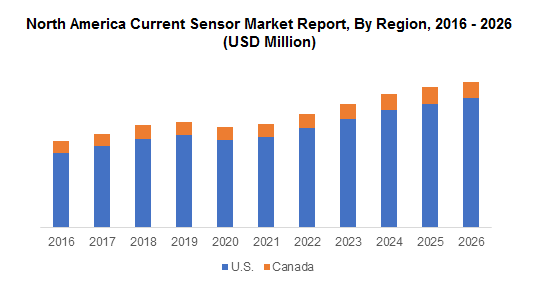 A current sensor delivers a high-speed response and efficiently detects the overload current & phase control of various industrial machinery. Industrial robots require current sensors to monitor the flow of current and voltage in microcontrollers. The increasing adoption of industrial robots in various manufacturing facilities for efficient workflow management will drive the market growth. According to the International Federation of Robotics Report 2020, the operational stock of industrial robots in the U.S. is recorded to be 293,200 units with an increase of 7% from the previous year.

The converter & inverter application segment will expand at 5.5% CAGR during the forecast period. Growth is credited to the rising adoption of converters and inverters in renewable energy applications such as residential solar rooftops, photovoltaic systems, etc.

The converter & inverter application requires current sensors to reduce the cost per watt and optimize power extraction from solar panels. These sensors efficiently detect faults and manage the control of convertors & invertors. Rising government initiatives to accelerate solar power adoption in the region will boost the market growth opportunities. In November 2020, the U.S. Department of Energy (DOE) announced an investment of around USD 130 million to accelerate new projects in solar technology in the U.S.

The U.S. current sensor market is poised to grow at a CAGR of around 6.5% through 2026 due to the increasing adoption of smart home devices and IoT devices in the region. The proliferating smart home trend will increase the adoption of various electronic devices, such as HVAC control, portable electronics, lighting control, and infotainment systems, which require current sensors for the efficient functioning of batteries and current/voltage fluctuations. According to the Government of U.S., the percentage of smart home devices in the U.S. will increase from 36.6% in 2020 to around 57% in 2025.

Market players are continuously involved in product innovations and research & development strategies to gain a high competitive edge among other players. In June 2019, NVE Corporation launched its new high-speed Tunneling Magnetoresistance (TMR) Smart Magnetometer, SM225-10E for applications in the Industrial Internet of Things (IIoT). Similarly, in March 2020, Allegro MicroSystems launched a new standalone Hall-based coreless current sensor - ACS37612, which enables the measurement of current from 200A to >1,000A.

Get this research report on North America Current Sensor Market customized according to your business requirements.