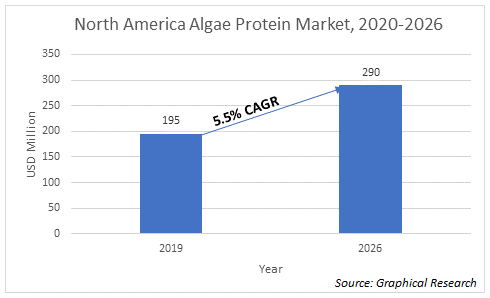 There has been growing demand for protein powders in North America among consumers owing to increasing sports activity and focus on healthier dietary patterns. This growing demand for protein supplements in North America should proliferate the demand for algae proteins. Also, plant-based derivatives such as plant-based meat and plant based proteins have gained popularity among consumers who are looking for alternative for dairy and meat based proteins.

In terms of types of sources, the seaweed segment valued at nearly USD 90 million in 2019 and will likely register highest growth rate of around 6% through 2026. Sea algae consists of numerous species of algae and are generally divided into three types of brown, green, and red algae.

Marine algae are rich source of protein and vitamins and exhibit various anti-oxidant properties. Utilization of plant-based proteins owing to their anti-oxidant and anti-inflammatory characteristics. Anti-oxidant characteristics of various algae help in preventing the damage caused to skin and other organs by free radicals. Increasing focus on skin health has influenced consumers in changing their diets and eat foods that offer anti-oxidant and anti-inflammatory benefits. Rise in the consumption of plant-based derivatives for enhancing skin health and improving nutritional value of foods should accelerate the market expansion.

The importance of physical activities and healthier diets is increasing among people suffering from overweight, diabetes, and high blood pressure, which has played vital role in triggering the demand for protein beverages to meet daily protein requirements. Plant based proteins have also gained popularity in United States and Canada as consumers are looking for substitutes for meat and dairy based proteins, stimulating the North America algae protein market growth.

Depending upon dosage forms of algae proteins, the capsules segment size in the North America algae protein market surpassed USD 30 million in 2019. Algae protein capsules are used for promoting heart, skin, bone, and joint health. These capsules also help in providing necessary nutrients such as vitamins, multivitamins, and proteins which are required for maintaining overall health. Algae proteins in capsules can be utilized for lowing bad cholesterol and triglycerides and preventing oxidative damage.

Nutraceutical products have gained traction pertaining to growing health consciousness among consumers, which has boosted the adoption of encapsulated protein supplements that offer various health benefits. Fast lifestyle in urban areas has also driven consumers’ dependency on medicines that enhance overall health, which should also bolster the nutraceuticals demand.

Companies are focusing on partnerships and agreements to extend their product reach and distribution channel. In 2019, Corbion and Nestlé signed an agreement for development of algae-based ingredients using technical capabilities of both the companies.

Get this research report on North America Algae Protein Market customized according to your business requirements.