The market growth is owing to the increasing penetration of smart home devices such as smart TVs, service robots, connected home appliances, and smart speakers, among others. These devices are equipped with high-end software, chipsets, and sensors, increasing the demand for automation testing in the coming years.

According to the Consumer Technology Association press release 2020, around 69% of the total households in the U.S. have at least one smart home technology product in their households. The rising penetration of IoT technology in the region will further amplify the adoption of home automation devices. This will increase the requirement for unit testing, security testing, and regression testing, among others to deliver secure connection and smooth functioning of devices over an internet network.

Market players are accelerating their development in regression testing to cater to the high demand from mobile manufacturers. In September 2019, Appvance launched the AI test generation for various mobile-based applications such as Android, iOS, and hybrid. The new automated test generator includes regression and smoke testing to enhance the performance of mobile-based software. 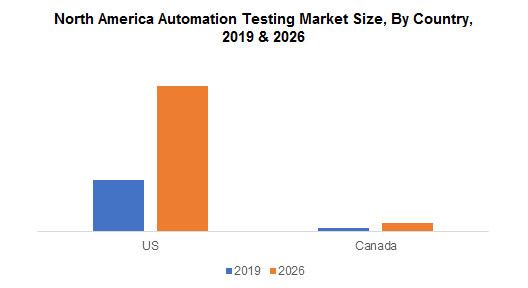 The U.S. market size for automation testing was over USD 6 billion in 2019 and is expected to witness 17.5% growth rate during the forecast period, attributed to the presence of major software and IT firms such as Cognizant, Amdocs, and Hewlett Packard Enterprise Development LP, among others.

Innovative players, such as Astegic and Cginiti, among others, are continuously involved in the development of automated software and testing solution, such as the DevOps platform, adding an opportunity for the market growth. For example, in January 2020, CollabNet partnered with XebiaLabs to develop the DevOps platform with deployment automation capabilities.

Key players operating in the North America market are Accenture, Amdocs, Astegic, CGI, Cginiti, Eggplant, and Tricentis, among others.

Market participants are continuously focusing on new product innovations and research & development initiatives to cater to the high competitiveness among other players. For instance, in October 2020, Tricentis launched its new artificial intelligence-based software testing tool, Vision-AI’ to deliver improved automated testing solutions to its customers.

Get this research report on North America Automation Testing Market customized according to your business requirements.