The Asia Pacific market growth is driven by the rising government initiatives to support digitalization in various industries to automate business processes. The rising adoption of digital technologies will accelerate the demand for automaton testing to modernize the customer interface with various software applications. For example, in FY 2020 - 21, the Government of India had announced to invest around USD 530.4 million to accelerate the ‘Digital India’ initiative. These schemes will increase digital literacy in India and will increase the demand for new endpoint interface devices including mobile, web, and cloud platforms.

The API testing segment held around 9% market share and is anticipated to expand at 14% CAGR through 2026, owing to the rising adoption of API testing in various IoT and connected home devices.

The automotive segment size in the Asia Pacific market crossed USD 350 million and will register growth of over 15% during the forecast timeline. Rising concerns on vehicle safety have accelerated the adoption of various infotainment systems such as touchscreen displays, telematics control units, and instrument clusters, among others.

The data delivered by these infotainment systems should be highly precise to enhance vehicle safety, accelerating the demand for automation testing services. These infotainment devices also include various operating systems, such as Linux, QNX, Windows, and electronic controllers, which will increase the demand for cross-browser testing. 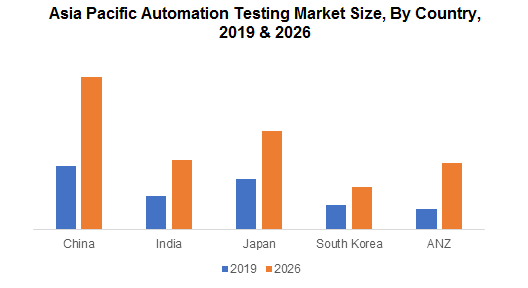 South Korea accounted for Asia Pacific automation testing market share of 11% in 2019 and is expected to grow at a CAGR of more than 10% till 2026. The presence of major consumer electronics manufacturers, such as LG and Samsung, is accelerating technological innovations in the country. These major players are continuously inclined toward the development of technologically advanced consumer electronic products, such as smart wearables, smartphones, and connected devices, which require automation testing for smooth processing. Rising government initiatives to accelerate the development of AI and IoT will also propel the growth opportunities for regional automation testing providers.

Mojor players operating in the market are Capgemini, Tricentis, Cognizant, Accenture, Amdocs, Atos SE, and HCL Technologies Limited, among others.

Market players are continuously focusing on new strategic collaboration and acquisition strategies to accelerate their position in the industry. For instance, in April 2021, Tech Mahindra acquired DigitalOnUS, which is engaged in offering hybrid Cloud and DevOps services. This acquisition will help the company to accelerate its capabilities in DevOps & cloud native engineering and enhance its presence in the U.S. & Canada.

The market for automation testing in Asia Pacific exceeded USD 3.5 billion in 2019 and will expand at a CAGR of 14% through 2026 with robust government initiatives to boost digitalization.
The automotive application segment will expand at a healthy CAGR of more than 15% through 2026 in APAC owing to escalating concerns over vehicle safety.
The market share from the API testing segment will observe a strong CAGR of around 14% through 2026 with rising trend in IoT and connected home devices.
The industry for automation testing in South Korea was valued at 11% in 2019 and will thrive with a CAGR of 10% through 2026 due to presence of leading consumer electronics manufacturers.
Customized Report  Request Free Sample
Inquiry Before Buying  Request Free Sample