Deviations in the pattern and quality of sleep result in various sleep disorders and repercussions. Sleep is a biologically active period in which a lot of essential processing, restoration, and strengthening occurs that is needed for proper cognitive and behavioural functions. Constant and repeated interruptions during sleep affect the health of an individual resulting in serious health problems. 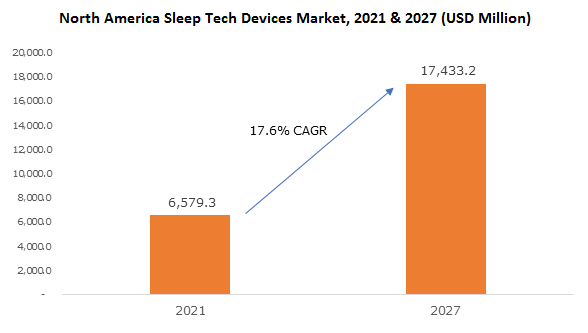 Sleep disorders are on the rise and it covers a wide spectrum of diseases with more than hundred identified sleeping problems and disorders. These are broadly categorized into insomnia, hypersomnia, and obstruct sleep apnea among many others. Sleep apnea is becoming a serious health issue in the U.S. and is considered one of the major sleep disorders. It is evaluated that around 75 percent of adult U.S. citizens encounter sleep disorder symptoms at least a few nights per week. According to the American Sleep Apnea Association, annually, around 22 million Americans suffer from sleep apnea, with a high share of mild and severe obstructive sleep apnea undetected cases.

Wearable sleep tech devices are predicted to garner maximum market share of around 74% in 2020, owing to the introduction of advanced sensors in compact form-factors. Also, these devices are cheaper as compared to non-wearable devices.

Male segment size was more than USD 3 billion in 2020. New technologies and gadgets always appeal to men and they adopt such devices more quickly. Also, lifestyle changes have increased the demand for smart sleep tech devices amongst males mainly due to increase in awareness regarding benefits of quality sleep over health and well-being.

The insomnia segment accounted for nearly 47% market share in 2020. In North America region, a large number of people suffer from insomnia that raises the adoption of sleep tech devices. Recently developed sleep monitoring and therapeutic devices help in optimizing the daily activities and aids in insomnia that surges the segment growth.

The direct-to-consumer segment revenue crossed USD 2 billion in 2020 led by increasing preference of people towards online shopping for faster and easier access to the product. Also, rising promotional activities and endorsement of sleep tech devices by celebrities on social media platforms and other online platforms are some of the factors contributing to the segment demand.

The U.S. market for sleep tech devices is anticipated to grow at 17.3% CAGR during the forecast timeframe. Increasing technological advancements, growing attention to mental health, and rising adoption of activity and sleep tech wearables in the U.S. will enhance the market growth. Also, according to the Centers for Disease Control and Prevention (CDC), in 2016, the number of people aged 65 or older was 49 million and the figure is expected to nearly double by 2030.

These industry participants have undertaken numerous strategies including new product launches and acquisitions that have helped them to gain competitive advantage over others. For instance, in March 2021, Fitbit Inc. announced the launch of Fitbit Ace 3, a next generation sleep and activity tracker. The new product launch is aimed at adding young consumers to its existing customer base.

Get this research report on North America Sleep Tech Devices Market customized according to your business requirements.