Paving bitumen has witnessed a strong demand historically and will continue to maintain its domination in near future. The paving bitumen demand in Asia Pacific is primarily driven by rising road construction in emerging economies such as India, China, Indonesia, etc. The transportation industry has witnessed monumental growth in the region owing to ever-increasing domestic markets and huge infrastructure investments. Most of the countries in the region are developing economies and governments understand the importance of good road infrastructure. Due to the above-mentioned factors, many countries are building an intense roadway network to boost their economic growth.

The China road & highway construction industry has been growing rapidly due to increasing urbanization and rising automobile ownership in the region. The rising manufacturing activities in the country followed by freight and passenger road transportation will further propel the road development & construction industry. The Government of China is increasing its investments to develop road networks in the country. The presence of major market players in Asia Pacific including British Petroleum, Shell Bitumen, and ExxonMobil will augment the industry expansion. 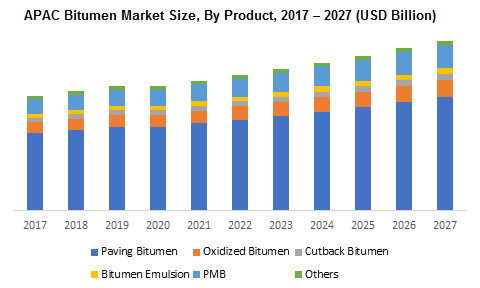 The polymer modified bitumen segment revenue is expected to grow at a CAGR of 5.6% through 2027. Polymer-modified bitumen has polymers added to the traditional bitumen. PMB exhibits excellent properties such as high cohesiveness, extra strength, resistance to fatigue, stripping, and deformations, making it a material of choice for end-use applications. PMB possesses low-temperature sensitivity compared to traditional products, thus making it preferable for pavement applications. 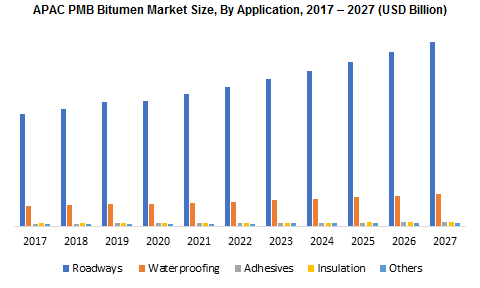 Asia Pacific is witnessing strong investments in the infrastructure and building & construction sectors. The region has some of the largest geographic markets, such as India, Indonesia, and China, with a rapidly expanding population. Furthermore, the region has a robustly growing construction industry, which will drive product demand in the coming years.

What was the size of the Asia Pacific bitumen market in 2020?
The industry for bitumen in APAC crossed an annual revenue of 45 billion in 2020 and is expected to rise at a 4.6% CAGR up to 2027 with growing road construction activities in India, China, and Indonesia.
What factors will influence the demand for polymer modified bitumen products across the Asia Pacific?
The market for bitumen in APAC is expected to grow at a CAGR of 5.6% in the coming years with increasing use across end-use applications.
How is the Asia Pacific bitumen industry forecast driven by other applications?
The regional industry share from the other application segment will reach a substantial remuneration by 2027 owing to higher investments across the infrastructure and building & construction sectors.
Which are some of the leading bitumen suppliers in the APAC region?
Royal Dutch Shell, Total S.A., Exxon Mobil Corporation, and Valero Energy Corporation are some of the contributors to the Asia Pacific market.

Get this research report on Asia Pacific Bitumen Market customized according to your business requirements.