However, environmental concerns associated with the extraction of bitumen are anticipated to hamper the market growth over the forecast period. Conversely, the rising applications of bitumen as an adhesive material are likely to offer new growth opportunities to the market. 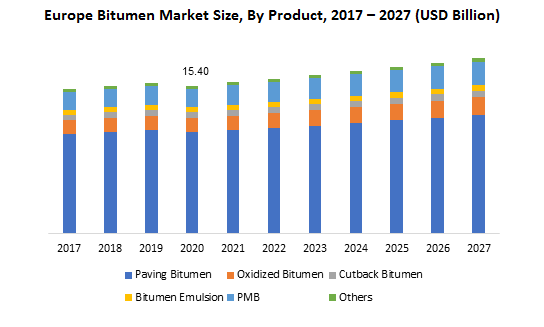 The PMB segment is projected to expand at 3.2% CAGR till 2027. Polymer-modified bitumen is a mixture produced from bitumen and polymers in which the polymer changes the visco-elastic behavior of bitumen and thus make this binder more suitable for different stresses.

Polymer-modified bitumen has witnessed significant popularity in the last few decades for road development as well as building and construction. There is a rising need for superior-quality roads to accommodate the high-speed limits of the regularly plying vehicles on expressways and motorways. The overall road network in the region was estimated at around 8.4 million kilometers with the top five countries including France, Russia, Germany, Spain, and Sweden accounting for more than half of the total network.

The oxidized bitumen segment is set to observe around 10% growth through 2027. Oxidized bitumen is characterized by its rheological properties that are substantially modified by reaction with air at elevated temperatures. It has a rubbery toughness, a higher softening point, and more flow resistance than a similar hardness straight run bitumen. It is commonly used as an anti-slip layer in the piling industry to produce roofing felts, as an undercarriage sealant in the automotive industry, as a sealant compound, as an electric cable joint safety, and many other applications. 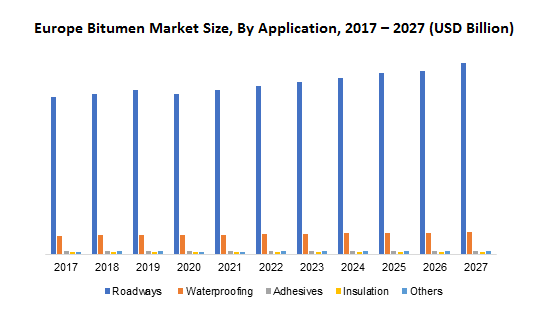 Rising investments in the road development & maintenance sector especially in Western European countries will have a positive influence on the Europe bitumen market demand. For instance, the German government's transport infrastructure development investment plan of around USD 290 billion by 2030 is a part of the country's new 15-year plan, which is significantly higher than the last investment plan of a little over USD 10 billion per year.

Companies are majorly focusing on expanding their product portfolio to maintain their position in the market. For instance, in September 2018, CNPC entered into an agreement with Rosneft in Russia's exploration & development sector and collaborated with Gazprom in the R&D & promotion of EOR technology to expand its global reach.

How will the Europe bitumen industry perform through 2027?
The market for bitumen in Europe exceeded USD 15 billion in 2020 and will record a growth of 2.5% between 2021 and 2027.
What factors will augment the share of PMB to the Europe bitumen segment?
Polymer-modified bitumen or PMB will record a CAGR of 3.2% over 2021-2027, owing to rising product deployment in building and construction and road development.
Why will Europe oxidized bitumen market gain traction in the coming years?
Oxidized bitumen will register a growth of 10% over 2021-2027 due to the presence of multiple properties such as higher softening point, rubbery toughness, and more flow resistance.
Why will Western Europe record a rise in bitumen sector?
The industry for bitumen in Europe across Western Europe will grow on account of surging investments in the areas of road development and maintenance.

Get this research report on Europe Bitumen Market customized according to your business requirements.