Rapid increase in the application of connected devices in various business establishments has directed to an increasing demand for indoor distributed networks in the Asia Pacific region. Indoor wireless connectivity through Li-Fi allows business users to access the internet at high speeds, send & receive email and make calls. The ability of Li-Fi to transmit high volume of information without any interference from current radio frequencies will propel the market share. 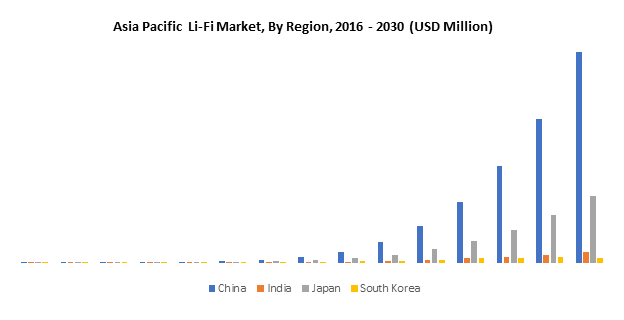 The increasing use of industrial automation technologies in the growing manufacturing sector in China is propelling the requirement for secure and fast network communication systems. Rapid internet penetration and technological advancements in the field of IoT are contributing to this growing demand. According to the China Internet Network Information Center, internet penetration reached 61.2% in 2019, increasing by 1.6% compared to 2018.

The Asia Pacific Li-Fi industry witnessed a sluggish growth during the second half of 2020 owing to the escalating spread of the COVID-19 pandemic. Several market factors, such as rapid rise in unemployment and reduction in consumer disposable income, contributed to the slow growth. The surge in the spread of virus has resulted in the decline in the adoption of advanced technologies, thereby hampering the market growth for Li-Fi.

The growing internet usage through smartphones and other electronic gadgets is fueling the market demand. Rapid increase in the population of countries including India and China coupled with gradually reducing costs of smartphones and other smart devices is creating a high demand for internet connectivity and high data transfer speeds in the region.

The LED segment is expected to observe an accelerated growth in the Asia Pacific Li-Fi market till 2030 owing to the high penetration of LED light sources in the market. The establishment of regulatory initiatives for energy efficiency has led to increased LED demand. The photodetector segment is anticipated to display a steady growth through 2030 due to its ability to decode the signals received from LED transmitters and power the Li-Fi system.

What is the projected growth trend for Asia Pacific Li-Fi market size?
The market for Li-Fi in Asia Pacific was valued at more than USD 13 million in 2019 and will could witness 65% CAGR up to 2030 with robust application of connected devices for indoor distribution networks.
Why are LEDs witnessing increased demand in Asia Pacific Li-Fi sector?
The industry share from the LED segment will witness a considerable gain by 2030 due to expanding footfall of LED light sources across the region to support energy efficiency norms.
How will the aerospace and defense application foster APAC Li-Fi industry outlook?
The market share from the aerospace and defense application will grow at a notable rate with increasing demand for improving navigation capabilities.
Which are the major companies in Asia Pacific Li-Fi landscape?
Major industry participants in the market are PureLiFi, VLNComm, NAV Technologies, General Electric, and Oledcomm, among others.

Get this research report on Asia Pacific Li-Fi Market customized according to your business requirements.