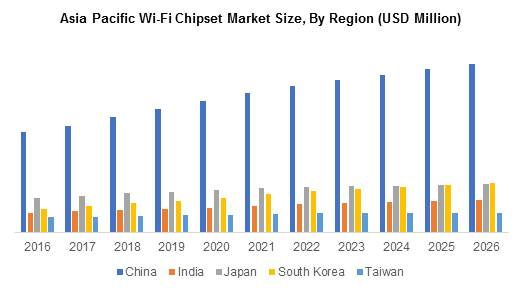 The IEEE 802.11n (SB and DB) segment accounted over USD 960 million revenue in 2019. The IEEE 802.11n standard is majorly adopted in the WLAN communication network as it can extend the range of wireless transmission and enhancing the reliability & speed of the network. Wi-Fi chipsets with IEEE 802.11n standards offer a data transfer rate of up to 600 Mbps, increasing their adoption in large enterprises and outdoors.

The dual band configuration will observe around 3.5% growth rate till 2026. Dual band Wi-Fi chipsets utilize the frequency of both 2.4 GHz and 5 GHz frequency bands. It enhances the network speed and interference from other devices, thus boosting their adoption in advanced automotive applications. Market players are also launching innovative products in the market to cater to the high demand from major automotive OEMs. In January 2020, Qualcomm developed a Dual-MAC Wi-Fi Chip, “QCA6595AU” for automotive applications.

The China market for Wi-Fi chipset is predicted to record a CAGR of around 4% through 2026 driven by the rising internet penetration in the region with high internet connectivity. Around 800 million Chinese citizens use the Internet with strong fiber, broadband, and high internet coverage even in remote regions. This will accelerate the demand for high-quality Wi-Fi chipsets. The rising number of internet users has positively influenced the government to establish wireless infrastructure in the region, adding an opportunity for the- market expansion. For example, in December 2019, China implemented around 10 million public Wi-Fi hotspots, among which four million were government Wi-Fi hotspots.

Get this research report on Asia Pacific Wi-Fi Chipset Market customized according to your business requirements.