Europe 2,5-Dimethyl-2,4-Hexadiene Market size crossed USD 47.2 thousand in 2019 and will exhibit a CAGR of 2.3% from 2020 to 2026. An increasing need for insecticides and the potential healthcare applications of 2,5-dimethyl-2,4-hexadiene will fuel the market demand.

2,5-Dimethyl-2,4-hexadiene belongs to the class of organic compounds known as alkadienes. This electron-rich alkene helps in inducing photo-dichlorination of 9,10-dichloroanthracene. 2,5-Dimethyl-2,4-hexadiene finds applications in the production of insecticides and 9-chloroanthracene (MCA). Other applications of the product include biochemical research and it is used as a potential biomarker in breath for the prediction of lung cancer.

Among the applications, the insecticides segment dominated over 55% of the market share in 2020owing to increasing usage of the product in agricultural applications, especially as an intermediate for the production of low toxicity and high efficacy insecticides. Europe has been witnessing increasing sales of insecticides in the past years. In 2016, the total insecticides & acaricides sales reached 37,209,060 tonnes as per the European Environmental Agency (EEA). Spain emerged as the highest pesticides consuming nation followed by France, Italy, Germany, and Poland. These countries accounted for up to 71% of the total sales in the year according to EEA. Additionally, the growing regional population is further intensifying agricultural production and hence driving the demand for agrochemicals. However, the upward trend in organic farming may impede market growth. Nevertheless, technological developments in the agricultural field, such as smart technology and precision farming are laying paths for sustainable agricultural production. 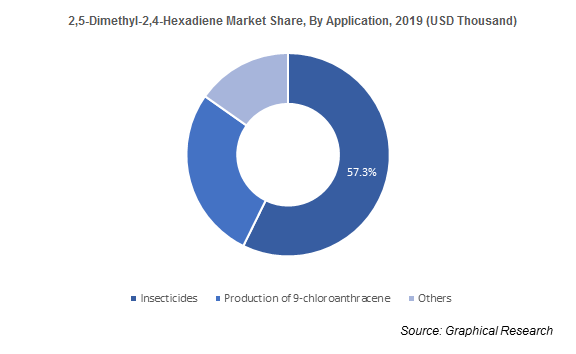 The outbreak of COVID-19 disease resulted in an increasing number of research activities. The 2,5-Dimethyl-2,4-hexadiene market observed a rise of 2.7% in 2020 compared to a rise of 1.1% in the previous year. However, the demand from the agricultural sector was negatively impacted due to the pandemic. The reduced production of crops in several regions plummeted the demand for insecticides.

2,5-Dimethyl-2,4-hexadiene is used in biomarker testing to diagnose lung cancer by determining the presence of particular mutations or particular proteins. The increasing number of cancer patients across the region is significantly fueling the market demand. For instance, in Europe, some 213,663 men and 98,982 women are diagnosed with lung cancer each year according to the Lung Cancer Europe (LuCE). Occurrences on such rates render lung cancer the second and third most commonly diagnosed cancer in men and women, respectively. Also, men are more frequently diagnosed with lung cancer in Europe and other parts of the world.

2,5-Dimethyl-2,4-hexadiene is widely used in the production of 9-chloroanthracene which is a key intermediate for many pharmaceutical reactions. Therefore, the healthcare sector plays a significant role in market development. Several countries in Europe have a robust healthcare infrastructure and have been recording high healthcare expenditure. For instance, the EU spent 9.929% of the GDP on healthcare in 2016. Relative to GDP, the EU members which logged the highest expenditure in the year included Germany, France, and Sweden. Moreover, countries, such as the United Kingdom, Germany, Italy, France, and Spain are among the top nations attracting substantial pharmaceutical investment in recent years. Also, the continuous research activities in the pharmaceutical industry to develop novel anti-cancer agents will further escalate the demand for 2,5-dimethyl-2,4-hexadiene.

Key industry players are constantly involved in strategic developments to reinforce their market foothold. These developments may include mergers, acquisitions, partnerships, new product launches, or production capacity expansion. For instance, in November 2015, Merk Group acquired Sigma-Aldrich Co. which enabled the company to enhance its market share in the life science sector along with the expansion of e-commerce platforms across the globe.

Get this research report on Europe 2,5-Dimethyl-2,4-Hexadiene Market customized according to your business requirements.