Anti-viral medicines are class of drugs used in treatment of viral infections such as common flu, severe influenza, HIV, and hepatitis among several others. Anti-viral drugs inhibit the development of disease-causing viral pathogens to eradicate its effect. Due to the increasing prevalence of viral infectious diseases, the industry is expected to foresee significant demand in the coming years. 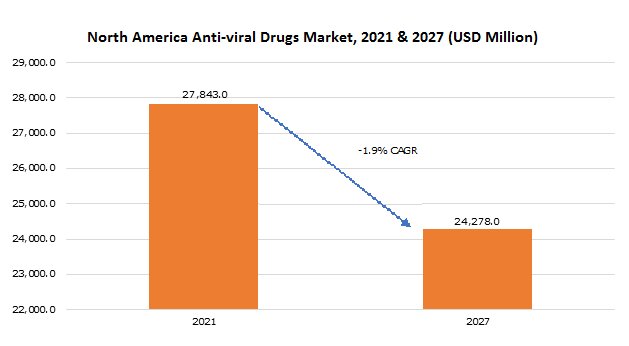 High prevalence of viral infectious diseases including HIV and hepatitis is projected to spur North America market growth. According to the U.S. Department of Health & Human Services, about 2.4 million people were affected with hepatitis C in the country with 51% of affected population unknown of their infection. Moreover, increasing number of HIV patients with need for awareness and expansion of treatment coverage create product demand for cost-effective drugs. Thus, demand for highly active anti-viral drug therapies for life-threatening viral infections will drive the regional industry growth.

Along with existing diseases burden, incidence of pandemic such as Swine Flu (H1N1) and recent COVID-19 outbreak has influenced the product development and launches. Coronavirus infection has affected significant number of Americans, that has resulted in extensive R&D by research institutes and organizations in search for effective therapeutic treatment for the disease. Therefore, with increasing R&D activities pertaining to the development of novel anti-viral drugs to minimize the disease burden will propel market expansion.

The DNA polymerase inhibitors segment held significant revenue share in 2020 and is anticipated to foresee -1.8% CAGR between 2021 and 2027. Most of anti-viral drugs are developed to restrict adsorption, penetration, and nucleic acid synthesis of viral pathogens. DNA polymerase inhibitors are effective against viral replication through inhibitions of DNA polymerase enzyme that is responsible for virus growth. The development of effective anti-viral drugs for range of viral infection with focus on specific targeted therapies will fuel the overall segment growth.

The HIV AIDS segment dominated over 48% antiviral drugs market share in 2020 attributed to growing disease burden. About 1.2 million overall HIV population were reported in the U.S. with 36,400 newly acquired infections in 2018 and approximately 37,968 people were accessing testing and diagnosis services in the year. Increasing treatment accessibility coupled with organizational efforts and government initiatives associated with HIV will stimulate the product demand.

The branded anti-viral drugs segment revenue was over USD 17 billion in 2020. Involvement of major industry players extensively focusing on development of new drug therapies for diseases such as HIV and hepatitis will offer tremendous growth opportunities to the segment. For instance, Merck collaborated with Dewpoint Therapeutics to develop a novel HIV treatment mechanism by integrating Dewpoint’s proprietary platform for condensate-based drug discovery.

U.S. antiviral drugs market size is expected to cross USD 21.5 billion by 2027 owing to increasing prevalence of infectious diseases. According to the Centers for Disease Control and Prevention, about 35.5 million people were affected with influenza, leading to 490,600 hospitalizations and over 30,000 deaths in the country during 2018-2019 influenza season. In addition, it is one of the highly COVID-19 affected countries with more than 30 million infections. Thus, leading players in the country are collaborating and partnering for the development of anti-viral drugs. Therefore, increasing R&D expenditure catering to rising demand among patient population will positively impact the U.S. industry revenue.

Some of the major industry players include AbbVie Inc., Gilead Sciences, Merck & Co., and Bristol-Myers Squibb, among others.

The key players are undertaking various strategies such as collaborations and mergers & acquisitions to sustain market competition and explore the untapped business potential. For instance, in October 2020, Gilead Sciences received the U.S. FDA approval for the anti-viral drug Veklury (Remdesivir) used in treatment of patients with COVID-19.

Get this research report on North America Antiviral Drugs Market customized according to your business requirements.