Europe Elevator Market size surpassed USD 12.9 billion in 2021 and is anticipated to observe around 2% CAGR between 2022 and 2028. The market growth is on account of the growing need for elevator modernization across Europe in aging constructions. 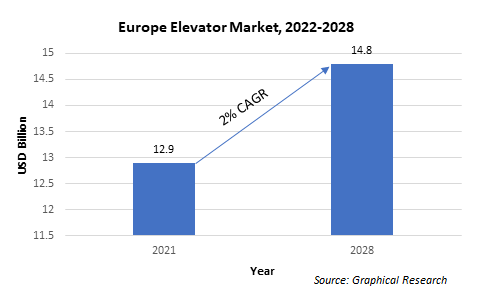 Vertical transportation systems like elevators are becoming a standard component of modern buildings, given their ability to increase access to all areas of the structure. Efficient elevator systems are becoming critical for safer and more comfortable access to various floors of buildings, particularly due to the growth of aging populations across Europe.

With the rapid aging of the baby boomer population, the geriatric population, and consequently the number of people with disabilities will continue to grow, thus amplifying the demand for advanced mobility solutions like elevators. In Europe, the administration has recommended the use of national measures to ensure that all levels of existing as well as under-construction buildings are accessible to people with disabilities, such as by providing at least one lift in each new building for wheelchair-bound individuals.

One of the major driving forces behind the market expansion is the burgeoning focus towards development of high-rise constructions. Driven by rapid urbanization and a steady rise in the urban population across Europe, a significant increase has been observed in the construction of high-rise buildings and skyscrapers over the years.

Impact of COVID-19 on Europe Market

Several industries across the European region suffered significant setbacks due to the onset of the novel coronavirus pandemic in early 2020, including the elevator industry, which took a hit due to the massive disruptions to construction activity in the region. According to a report from Kone, in the 10 topmost European cities in Europe, average elevators journeys decreased by almost 80% between February to April 2020.

However, the Europe elevator market could witness a potential recovery in the coming years, as the use of office elevators rises gradually in major cities like Milan, Paris, Stockholm, Brussels, Helsinki, Munich, and Berlin, among others, despite a slight decline in return to office buildings in October 2021.

The MRL (machine room-less) traction elevators segment is set to register an appreciable growth rate during the forecast period, given the high demand from industrial facilities and the ability to provide energy efficiency in industrial facilities. MRL elevators use nearly 80% less energy than their hydraulic counterparts, which curbs their environmental impact and allows them to reduce space requirement and maintenance costs while increasing efficiency and reliability.

The residential sub-segment of building and construction segment will gain significant momentum through 2028, on account of the rapid rise in construction of private homes, mid-and high-rise buildings, and apartments across Europe to accommodate the rapid shift of populations to urban areas.

Spain is likely to emerge as a major revenue pocket for the Europe industry in the coming years, credited to the gradual recovery of construction output in the region and the subsequent surge in industrial development.

Spain elevator market from the industrial segment will reach USD 136 million revenue by 2028. Estimates from Atradius have revealed that following a decline of 14.5% in 2020, construction output in Spain is set to showcase a strong recovery rate of 13% in 2022.

What is the value of the Europe elevator market?
The industry size for elevator in Europe was crossed USD 12.9 billion in 2021 and is expected to exhibit a CAGR of around 2% between 2022 and 2028.
Why are MRL (machine room-less) traction elevators gaining widespread adoption in Europe?
The MRL traction segment is set to record considerable revenue by 2028, considering its ability to ensure energy efficiency across industrial facilities.
Which end-user will contribute to the burgeoning demand for elevators across Europe?
The residential building and construction segment will gain remarkable traction, given the rapid urbanization and the rise of private home construction.
How much revenue will the Spain industrial elevator sector record by 2028?
The industry for elevator in Spain from the industrial segment will register a revenue of USD 136 million by 2028.
Who are key players partaking in the Europe elevator industry share?
Prominent players in the market include Orona S.C., Glarie Elevator Co. Ltd., Hyundai Elevator Co. Ltd., Hitachi, Ltd., Otis Elevator Company, Schindler, Kone Corporation, Fujitec Co. Ltd., and Mitsubishi Electric Corporation, among others.

Get this research report on Europe Elevator Market customized according to your business requirements.