The APAC IR LED industry is driven by increasing demand for strong surveillance systems across various sectors including aerospace & defense, public infrastructure, among others. The integration of disruptive technologies, such as IoT and smart sensors, with surveillance systems will accelerate the market growth. The smart surveillance systems are experiencing rising adoption from smart cities, military applications, industries, among others. Major industry players are developing and introducing technology-based security systems in the market. For instance, in August 2020, Hubbell Lighting announced the development of a video security IoT platform “SpectraSafe” integrated with ambient light sensor and IR LED. It enables to capture images in low light conditions.

The 940 nm- 1020 nm segment is set to observe 8% growth rate from 2020 to 2026. The growth is driven by the rising adoption in automotive applications such as driver monitoring, gesture control, among others. The rising trend toward road safety in countries, such as India, Japan, China, Singapore, and others, has led automotive manufacturers to embed advanced safety systems in vehicles. To cater to high demand, IR LED manufacturers are continuously innovating new products with high wavelength for emerging automotive electronics applications. In October 2019, Everlight Electronics developed three new IR products for vehicle automation systems. It VS-FI3535 LED series based on wavelength of 940nm is used for driver facial recognition.

The BFSI segment is anticipated to grow at a CAGR of 10% till 2026. The growth rate is majorly attributed to the rising adoption of digital banking and various mobile payment gateways in China, India, and Japan. The IR LED provides improved reliability and security authentication for consumers performing digital transaction, increasing their demand in banking applications. Also, several government initiatives to accelerate digital payments and cashless transactions.

For instance, in April 2020, the World Bank released a report stating China implementation of QR code scanner (2D bar codes), digital wallets, and other devices across the region for technology firms. Furthermore, it has initiated various digital payment gateways such as Alipay and WeChat Pay. These digital platforms use near IR LED technology to scan the code and identify the unique and different pattern of products. 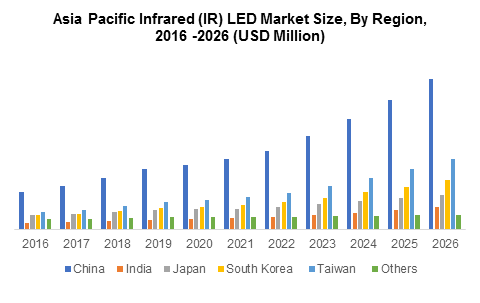 The Taiwan IR LED market is predicted to record a CAGR of around 15% through 2026 due to the presence of major IR LED manufacturers, such as Everlight and Epistar, in the region. These companies are continuously inclined toward accelerating their business offerings for IR LED. For instance, in FY2020, Everlight planned a capital expenditure of around USD 33.1 million for IR LED, automotive LED, and others. The country successfully held various exhibitions in collaboration with the players of the region. For instance, in October 2020, OPTO Taiwan 200 was held in Taipei to showcase development in the semiconductor industry. Major players, such as Innolux and PlayNitride, introduced their micro/mini LED based on infrared light source.

What is the projected growth rate for Asia Pacific infrared (IR) LED market over 2020-2026?
The industry for IR LED in Asia Pacific was valued at USD 200 million in 2019 and will register a 13.5% CAGR through 2026.
How will IR LED industry gain benefits from surveillance applications in Asia Pacific?
The market for IR LED in Asia Pacific will witness substantial growth from surveillance applications due to a strong demand for surveillance systems across aerospace, defense, and other industries.
Why is the 940 nm - 1020 nm segment gaining traction in Asia Pacific IR LED sector?
The 940 nm - 1020 nm will grow at an 8% CAGR up to 2026 with increasing integration in automotive applications such as gesture control, driver monitoring, and many more.
Why will Taiwan emerge as a profitable market for IR LED products?
Taiwan industry will grow at a 15% CAGR up to 2026 led by the presence of major manufacturers such as Epistar, Everlight, and others.

Get this research report on Asia Pacific Infrared (IR) LED Market customized according to your business requirements.