Test strips are composed of several layers that include top layer, middle layer and bottom layer. The top layer comprises mini-sponge to soak up the blood sample. The middle layer work as a filter to channel the blood sample to the reaction center. The bottom layer contains gold and palladium-coated circuit that transfers the reaction electrons to the meter for analysis. These layers identify the glucose level in blood and help patients to monitor their diabetes. 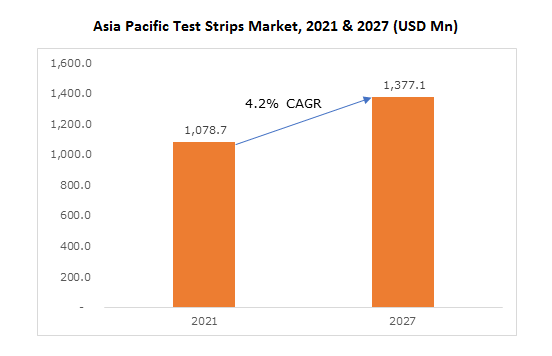 Growing prevalence of chronic diseases such as diabetes and kidney related disease across the APAC test strips industry growth. For instance, according to the World Health Organization, about 227.0 million people live with type 2 diabetes in Asia pacific region. Among those cases, nearly half of them are undiagnosed and unaware of developing long-term complications.

Furthermore, increasing number of geriatric populations in countries such as China and India will boost the market growth. Geriatric population is prone to kidney disorders as well as urinary tract infection that will boost the adoption rate. For instance, according to the Kidney Health Australia report 2018, around 1 in 2 women and 1 in 20 men are likely to suffer from a urinary tract infection (UTI) in their lifetime.

The diabetes test strips segment accounted for USD 964 million revenue in 2020 and is predicted to show significant growth of 4.2% between 2021 and 2027. Diabetes test strips are further classified into thick film test strips and think film test strips. The thick film electrochemical blood glucose test strips are composed of several layers including the separating layer, support layer and analytical layer. Each strip contains printed working and reference electrodes that are coated with reagents and membranes. These strips enable rapid results of blood glucose level, boosting the market demand.

The home care segment held more than 59% market share in 2020 due to rising awareness among the population regarding several point of care testing methods. Also, increasing number of people opting for test strips from online portals is growth another rendering factor. Furthermore, patients with diabetes need regular monitoring of their glucose levels. Therefore, people use test strips for personal use at their home care setting.

China test strips market size was over 186.2 million in 2020. China has the maximum number of diabetic patients in the world followed by India. For instance, according to the International Diabetes Foundation, an estimated of 116 million individuals aged from 20 to 79 years in China had diabetes in 2019. The number is by far the highest among any other country. Thus, rising prevalence of diabetes in the country will boost product demand as well as adoption rate, thereby propelling the market growth. Furthermore, increasing habit of alcohol intake coupled with lack of physical activities leads to sedentary lifestyle will further fuel diabetes prevalence.

Get this research report on Asia Pacific Test Strips Market customized according to your business requirements.