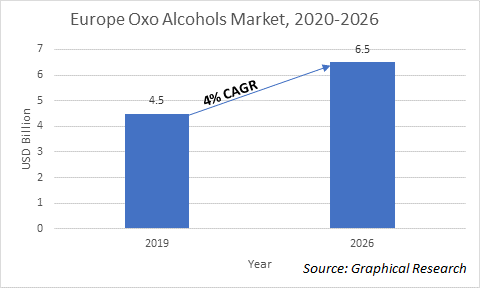 Oxo alcohols generally have three to fifteen carbon atoms and are transparent liquid. Some of key oxo alcohols available commercially are n-butanol, 2-methyl-2-butanol, 2-ethylhexanol, and 2-propylheptanol.

Acrylates, also referred as acrylics, are a type of vinyl polymer and are produce from acrylate monomers. Acrylates are popular among companies owing to its transparent, elasticity, and breakage resistance. Acrylates are used in coatings, paints, adhesive, and thickeners as these reduce the softening temperature as well as hardness.

Acrylate monomers enhance adhesion and flexibility of chemicals used in paints and adhesives. The demand for acrylate has soared in recent years pertaining to rising demand for artist paints, house paints, and emulsion. Rise in the demand for such product should accelerate the utilization of oxo alcohol in acrylate production.

The N-Butanol segment in the Europe oxo alcohols market is anticipated to register a growth rate of 4.5% between 2020 and 2026. n-Butanol is a four-carbon primary alcohol and is produced by oxo process of propylene, which results in formation of butyraldehyde n-butanal.

Butyraldehyde n-butanal is then hydrogenated to obtain butanol. N-butanol can be utilized in production of butyl acetate and amino resins, in such process n-butanol is mainly used as chemical intermediate. It can also be used as solvent for coatings, paints, varnishes, and plasticizers. There has been an increase in the number of construction activities in European countries, which has bolstered the consumption of solvents and plasticizers used in construction applications.

The construction industry in United Kingdom has been increasing owing to rising housing and commercial construction activities in the country. Further, there has been an increase in the number of repair and maintenance activities, which has also stimulated the UK construction sector, which should accelerate the demand for plasticizers, coatings, paints, and adhesives for construction applications.

What was the size of oxo alcohols market in Europe?
The market for oxo alcohols in Europe has reached USD 4.5 billion in 2019 and will record around 4% CAGR between the forecast period 2020-2026.
How will N-Butanol demand drive Europe oxo alcohols sector?
The regional market share from N-Butanol product segment is expected to witness 4.5% CAGR through 2026 with consistent demand for paints, coatings and other chemicals worldwide.
Why is the consumption of plasticizers boosting oxo alcohols use in Europe?
The European market size will expand through 2026 with increasing use in the production of plasticizers which are utilized in high temperature resistance applications.
What are the factors impacting UK oxo alcohols industry forecast?
The U.K. market share for oxo alcohols is growing due to increasing demand for paints, coatings, adhesives and other materials from the booming regional construction sector.

Get this research report on Europe Oxo Alcohols Market customized according to your business requirements.