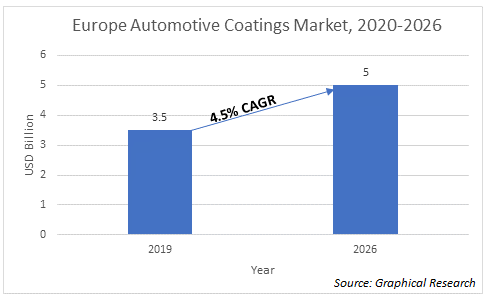 The electrocoat segment accounted more than USD 870 million revenue in 2019. Electrocoating or e-coating is an immersion painting process and uses electric current to attach paint to vehicle body. Electrocoat is applied to a vehicle by completely submerging the vehicle in a primer tank, after which coating is applied to the body through cathode deposition.

The number of light weight commercial vehicles produced has increased from 2,199 thousand units in 2018 to 2,201 thousand units in 2019. This rise in the production output of light commercial vehicle should accelerate the market demand. Further, adoption of new coatings with crosslinking properties has helped companies to increase coating durability, appearance, resistance to UV, rust, and scratch.

Get this research report on Europe Automotive Coatings Market customized according to your business requirements.