Europe Alternative Protein Market size for Animal Feed crossed USD 550 million in 2019 and is expected to gather considerable gains of over 7% between 2020 and 2026. 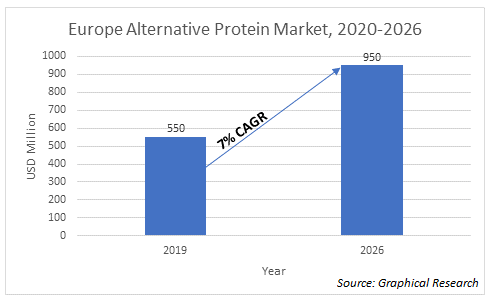 Soy protein isolate is a rich source of protein, containing about a minimum 90% protein, hence is mainly utilized in animal feed applications where nutritional value of animal diets is important. The demand for high protein animal feed has increased, owing to increasing emphasize on enhancing overall health performance of muscles, ligaments, heart, cartilage, and skin of animals. In addition, growing livestock production in European countries has bolstered consumption of animal feed in the region.

There has been continuous increase in the consumption of meat in European countries, owing to rising number of restaurants, hotels, and fast-food service providers. Therefore, this led to increase in the animal production activities in Europe region, and drive the demand for animal feed and feed supplements and additives.

Based on livestock, the poultry segment dominated the Europe alternative protein market size for animal feed was over USD 250 million revenue in 2019. Protein is an important nutrient in poultry feed and plays a vital role in overall chicken health, which affects egg production, chicken weight, immunity, and other biological characteristics. Therefore, this multiple benefits of the product to chicken led to fuel its market growth. In addition, the demand for alternative protein products has increased, owing to greater emphasize on reducing the overall feed costs.

Depending upon livestock, the pet food category is projected to register exponential growth at a CAGR over 6% CAGR from 2020 to 2026. The pet food industry has experienced significant growth owing to rising trend of pet adoption and growing humanization of pets. High cost of meat-based proteins for pet food may influence consumers to opt for various alternatives protein supplements. Growing consumer awareness regarding pet health and nutritional value of pet diets driven by changing lifestyle should stimulate the alternative protein for pet foods market.

Get this research report on Europe Alternative Protein Market customized according to your business requirements.