Asia Pacific 2,5-Dimethyl-2,4-Hexadiene Market size exceeded USD 86.4 thousand in 2019 and is estimated to observe a growth rate of 2.6% from 2020 to 2026. Growing usage of insecticides and the robust potential of the product for medical applications will drive the market revenue. 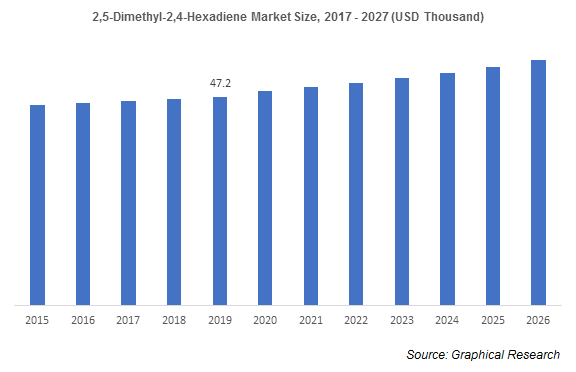 Additionally, a rapidly growing population in the region is further fueling the market demand. Asia’s population is predicted to rise to 5.1 billion by 2050 from 4.3 billion in 2015. The two major giant players of the Asia economy – China and India are key nations in the regional and global food system. For instance, in 2016, India and China cumulatively accounted for around 28% of the global cereal consumption. Moreover, the ongoing developments in agriculture and usage of modern technology to increase crop output will drive the demand for insecticides. 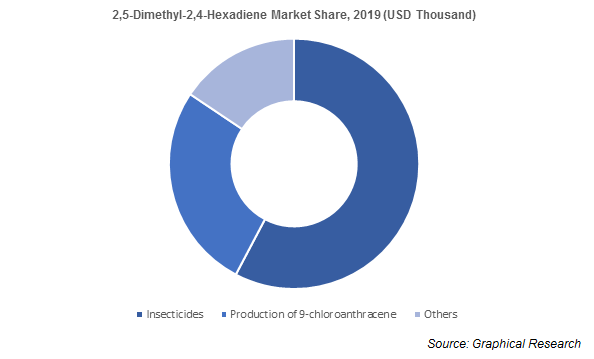 However, the ongoing coronavirus pandemic is expected to hinder the market growth. Countries like China and India are some of the most affected nations in the world. Therefore, in measures to contain the spread of COVID-19 disease, nationwide lockdowns were imposed in these countries along with several others across the region. The plummeted economic activity led to an increase in the unemployment rate and ceased manufacturing operations. A decline in consumer spending power has also been observed, which resulted in the declined product demand, especially from the agricultural sector. On the other hand, China – a major raw material supplier in the region has.

The Asia Pacific holds a major portion of the world’s cancer patients. Each year, around 50% of the new cancer cases are emerging from this region and are projected to increase by 36% by the end of 2030. 2,5-dimethyl-2,4-hexadiene has a strong potential to be used as a biomarker in the detection of lung cancer. Since biomarker testing is one of the key parameters in the identification of cancer, the consumption of 2,5-dimethyl-2,4-hexadiene is likely to accelerate over the coming years.

One of the key applications of 2,5-dimethyl-2,4-hexadiene is in the synthesis of 9-chloroanthracene which is a key intermediate in several pharmaceutical reactions. The exponential growth of the pharmaceutical industry across the region will fuel the product demand. Singapore, China, and Japan are some of the nation attracting the most pharmaceutical investments in recent years. Additionally, several researchers are developing new anticancer agents, which, in turn, will boost the adoption of 9-chloroanthracene.

Among the several countries included in the study, India 2,5-dimethyl-2,4-hexadiene market is expected to witness the most robust growth between 2020 and 2026. The key factors significantly contributing to the growth of the nation include the rising food demand, rapidly increasing population, rising research activities, and growing pharmaceutical industry. In the past decades, India has achieved tremendous growth towards food security. Since the independence, the country’s population has tripled, but food production has increased by over four times since then. Moreover, favorable government norms and rising investment in the agricultural sector will play a crucial role in the development of the Asia Pacific market.

Key industry players are increasingly investing in research & development projects to develop an innovative and economical process for the production of 2,5-dimethyl-2,4-hexadiene compound. Furthermore, industry participants are engaged in strategic initiatives, such as production capacity expansion, mergers, and acquisitions to strengthen their foothold in the regional market.

Get this research report on Asia Pacific 2,5-Dimethyl-2,4-Hexadiene Market customized according to your business requirements.