North America Prebiotics Market size crossed USD 500 million in 2019 and is anticipated to register a growth rate of 9% between 2020 and 2026. 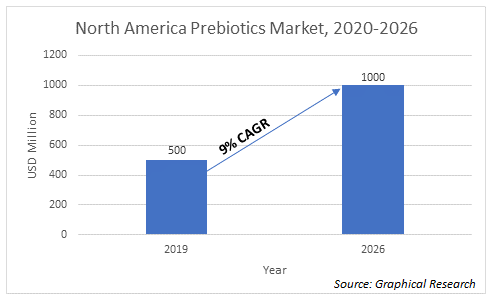 Prebiotics exist in various types of dietary products such as sugar beet, garlic, onion, banana, and wheat. Prebiotics are manufactured and added as supplements to feed products because of their very low concentration in these foods. These are produced using sucrose and starch as raw materials. Prebiotics can module the composition of gut microbiota, hence these are used in food and beverages as dietary supplements.

Lack of enough absorption of GOS may lead to IBC, there it is used for treating constipation. Further, it is also used for avoiding allergies in infants, treating colon and rectal infections. Significant changes in dietary patterns of millennials has led to an increase in the number of individuals facing problems like colon and rectal infections. This has influenced consumers to change their dietary patterns.

Nutrition plays a vital role in growth and performance of animals. Prebiotics such as FOS, isomalto-oligosaccharides (IMO), inulin, and GOS are used in livestock nutrition. Prebiotics are used for improving general health of animals. Commercial animal production has soared in North America owing to rising consumption of nonvegetarian foods and increase in the number household pets. Consumers are spending more on animal nutrition and feed additives, which has triggered the animal feed additives market. According to Statista, the animal feed additives market in the U.S. should reach to a value of around USD 9 billion in 2025 from approximately USD 6 billion in 2016. This increase should stimulate the consumption of prebiotics in animal feed applications.

Based on dietary supplements, the infant formula segment in the North America prebiotics market will record highest CAGR of 10% till 2026. Infant formula is a food developed for feeding babies. Prebiotics are used for improving immunity of babies and creating a balance of good bacteria in intestine of babies.

Parents are adding to the dietary nutrients to baby’s diet for preventing an infections and inflammations. The demand for nutraceuticals for babies has soared in recent years with increase in the number of newborn babies in North America.

North America region has experienced a significant growth in the dietary supplements and nutraceuticals sector, owing to rising consumer spending on overall health and wellness. Dietary supplements help in reducing chronic diseases and offer a longer and healthier life. This increase should trigger the consumption of probiotics among adults and children.

Get this research report on North America Prebiotics Market customized according to your business requirements.