North America Isopropyl Alcohol Market size exceeded USD 750 million in 2019 and is predicted to register a growth of over 5.5% between 2020 and 2026. 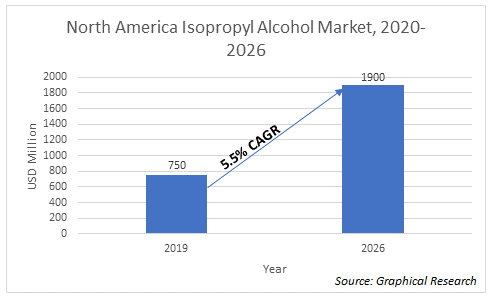 It is used for manufacturing industrial as well as commercial chemicals such as disinfectants and detergents. It is also used in rubbing alcohol in hospitals, sanitizer, and disinfecting pads. It is also used as an alternative for formaldehyde and different synthetic derivatives.

Based on application, the solvent segment is anticipated to observe around 5% CAGR through 2026. Solvents are used in manufacturing of various chemicals as reaction media for synthesis and separation of chemicals. Solvents are used in chemical manufacturing for extracting chemicals without altering the chemical composition. Some of major applications of industrial solvents are cleaning, paint & oil thinning, and intermediate.

Isopropyl alcohol is soluble in a variety of products and evaporates quickly compared to ethanol. Therefore, it is widely used as a solvent for thinning of oil and paints. Isopropyl alcohols are a replacement for ethanol due to low vapor pressure. The demand for solvents has increased in recent years owing to rising production chemicals and pharmaceutical drugs.

Use of cleaners and disinfectants has soared in North America owing to growing emphasize on hygiene and cleaning of industrial and residential premises. This increase has boosted the use of isopropyl alcohol for cleaning applications. Further, growing cosmetics and personal care product industry in United States and Canada. This rise has driven the use of isopropyl alcohol in cosmetics product man manufacturing.

North American Market, By End Use

Isopropyl alcohol is used as an antiseptic agent in cosmetic products such as aftershave, nail polish, hand lotions, and varnish base. It is also used for removing foam during the production of liquid finished products and changing the viscosity of cosmetic products. Consumption of cosmetics and personal care products in United States has increased owing to increasing consumer spending on personal care. This rise has propelled the use of isopropyl alcohol in cosmetics product manufacturing.

Get this research report on North America Isopropyl Alcohol Market customized according to your business requirements.