Europe Chlorine Dioxide Market size exceeded USD 250 million in 2019 and is estimated to observe growth rate of 4.5% between 2020 and 2026. Chlorine Dioxide is used as for bleaching, treating drinking water, disinfecting, fumigant treatment, and destroying phenols in wastewater. 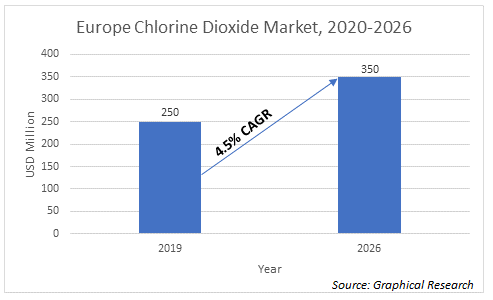 Chlorine dioxide is used in industrial as well as municipal water treatment for disinfection. It is mainly used for chlorination as it is less corrosive than chlorine and other water treating chemicals. It is mainly used as corrosion inhibitors in water treatment. It is also used against pathogenic agents such as bacteria, viruses, and protozoa. The demand for chlorine dioxide is triggered pertaining to increase in the utilization of wastewater treating chemicals. Further, government and municipal authorities are emphasizing on new environmental regulation that control the disposal of hazardous and polluted wastewater into the environment. This has led to introduction of new regulations on water disposable that companies must comply to, which should accelerate the market demand.

Based on countries, Germany market for chlorine dioxide held a major revenue share in 2019. The consumption of chlorine dioxide in Germany has increased owing to increasing utilization of disinfectant in industrial wastewater treatment and food & beverages applications. The chemical output in European countries have increased owing to growing chemical, pharmaceutical, and coatings industries. This rise in chemical industry has led to an increase in the number of industrial wastewater treatment plants in the region. This increase in the number of water treatment plants has driven the consumption of water treating chemicals, which should boost the market expansion in Europe.

What are the trends fostering Europe choline dioxide market size over 2020-2026?
The market for choline dioxide in Europe had surpassed USD 250 million in 2019 and will grow at a CAGR of 4.5% up to 2026 owing to the demand from bleaching, drinking water treatment, disinfecting and other applications.
How will industrial water treatment reinforce growth in the European choline dioxide sector?
The market share from industrial water treatment segment surpassed USD 120 million in 2019 and will grow through 2026 with the need to optimize and improve water quality before encountering industrial equipment and tools.
Why is Germany expected to be one of the major markets for choline dioxide?
Demand for chlorine dioxide in Germany is likely to surge due to profound traction for disinfectant in industrial wastewater treatment and food & beverages applications.
How is the competitive landscape in Europe choline dioxide industry?
With the presence of industry players like Sabre Companies, ProMinent, Acceptat, Ecolab, Tecme Srl, Scotmas Group and Iotronic, European market is likely to remain competitive through 2026.

Get this research report on Europe Chlorine Dioxide Market customized according to your business requirements.