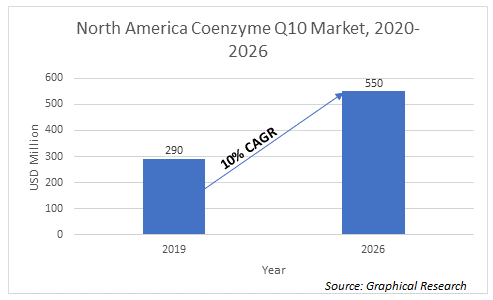 Coenzyme Q10 is a vitamin-like nutrient that is generally present in human body. It was first discovered in 1957. CoQ10 is mainly present in liver, heart, pancreas, and kidney. Coenzyme Q10 is an important substance which is required for effective functioning of vital organs in the body and various chemical reactions in human body. It is an antioxidant and reduces blood pressure.

In terms of application, the cosmetics segment is anticipated to expand at a CAGR of 9.3% through2026. Coenzyme Q10 is used in skin care owing to its antioxidant activities. Coenzyme Q10 is used for enhancing skin tone, reducing sun damage, and improving skin hydration. Antioxidants are used for aging skin, UV and infrared radiation, and pollution.

CoQ10 keeps skin cell active and energized. Energized skin cells get rid of toxics and utilize the nutrients. CoQ10 also helps in protecting skin from free radicles, which are produced in body by exposure to UV rays. The demand for North American Coenzyme Q10 industry has been increasing owing to growing consumption of cosmetics for treating damaged skins. Consumer spending on skincare has also augmented in recent years, which has driven the consumption of skincare products.

In United States, the revenue generated from facial cleansers sales in 2019 was worth near USD 1.55 billion. Further, the revenue generated by sun cream sales in United States should increase from around USD 1.95 billion in 2016 to nearly USD 2.65 billion by 2026. This increase in the utilization of sun creams should proliferate the demand for coenzyme Q10 in cosmetics applications.

Growing consumer awareness regarding skin care and health benefits of nutraceuticals and supplements and rising demand for cosmetics in United States and Canada have proliferated the consumption of nutraceuticals and dietary supplements. In Canada, in fourth quarter of 2019, the sales of minerals, vitamins, and various health supplements in around USD 575 million. Further, sales of prescription as well as over-the-counter drugs, vitamins and pharmaceutical supplements was worth nearly USD 28 billion in 2019.

This increase in the consumption of dietary supplements and pharmaceuticals in Canada and United States should trigger the North America coenzyme Q10 market growth. Moreover, increasing demand for facial cleansers and facial creams for treating aging skin and skin damages has boosted the cosmetics industry in North America.

Get this research report on North America Coenzyme Q10 Market customized according to your business requirements.