North America Outboard Engines Market size crossed USD 5,524.7 million in 2020 and is estimated to exhibit a CAGR of 4.3% from 2021 to 2027. Growth of the market is driven by an increasing fleet of commercial boats and growing consumer spending on recreational activities. 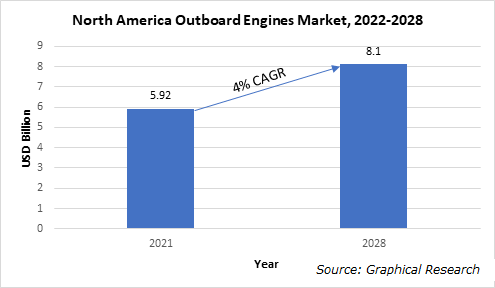 Boat manufacturers are also increasingly focused on new product offerings with appealing designs. This has proved to be an effective approach to improve the sales figures and bring out more buyers. Market players are aiming to target a wider consumer base with different interests and budget. The new strategies are adopted for a range of boats, including watersports, fishing, and pontoons, which witnessed increased demand in the past few years. Therefore, with the availability of a wide product portfolio to choose from, consumers have more buying options and are substantially contributing to the growth of North American outboard engines industry size.

The covid-19 pandemic, however, had a severe toll on the market growth in 2020. The U.S. is the most severely affected nation worldwide and hence observed a period of unprecedented downfall in economic growth. Measures to prevent the outbreak of coronavirus forced governments to implement a nationwide lockdown. Due to the restricted movement, disrupted supply chain, and alleviated consumer spending, manufacturers had to observe a period of abeyance across the region. The market value dropped by 1.6% in 2020, compared to a 2.1% growth in the previous year. But, with relaxation in the movement of goods and travel, the economy is entering into the recovery phase. A boost in the spending power of consumers can be expected, which will stimulate market growth in the upcoming years.

The commercial activities in the region are reviving back to their previous track, which is anticipated to act as a major driving factor for North America outboard engines market growth. Hence, the commercial application segment has been estimated to showcase the highest growth rate of over 4.5% during the forecast period. The growth is also supported by the increasing fisheries production in North America.

Based on engine type, the electric engine segment is likely to reflect the significant growth of 3.1% in the estimated timeframe. The demand is primarily driven by an increasing focus to support the transition to a sustainable future and reduce the carbon footprint. The government initiatives to promote the increased usage of electric vehicles and reduce the dependency on fossil fuels are further fueling the growth of outboard engines. Since electric engines are gaining popularity for water vehicles, manufacturers are shifting their focus towards the production of motors operating on electric power. For instance, Pure Watercraft, Inc. an outboard engine manufacturer in the U.S. is ramping up the production of electric motors to replace the normal boating requirements under 50 HP.

Get this research report on North America Outboard Engines Market customized according to your business requirements.