Growing prevalence of coronary artery diseases and rising demand for percutaneous coronary intervention procedures will boost the market growth. Rising prevalence of cardiovascular diseases such as heart attack and stroke along with growing geriatric population is expected to propel the demand for coronary stents. However, product failure and product recall due to safety issue along with stringent regulatory scenario in developed countries will restrain the market growth. 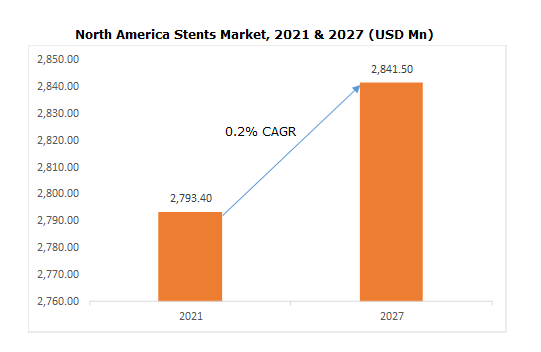 Self-expanding stents industry revenue is poised to reach USD 1 billion by 2027. Self-expanding stents are constrained within a delivery catheter until deployed and positioned. This delivery device is smaller than the balloon expandable stents system, thereby offering a superior deployment option.

Metal segment size will cross USD 2.1 billion by 2027. Metal is widely used for manufacturing a medical device as it has flexibility, lower rates of fracture and biocompatibility. Metal stents reduces the incidence of restenosis and abrupt vessel closure compared with balloon angioplasty. That decreases the rate of target lesion revascularization.

Vascular stents market value was more than USD 2.5 billion in 2020. Coronary artery disease is one of the leading causes of mortality and morbidity in the U.S. Coronary angioplasty is one of the widely used procedure during the treatment of blockages in arteries. As increasing number of people are suffering from coronary artery diseases, the demand for usage of stents is increasing. However, with the availability of drugs for management of angina and high cost of the surgery, the market is showing declining growth rate.

U.S. market size for stents was over USD 2.6 billion in 2020. Growing proportion of geriatric population in the country will have a positive impact on the regional market revenue. High pervasiveness of CVDs has increased the demand of stents due to advance technology. High pervasiveness of coronary disorders is due to adoption of sedentary lifestyle along with sub-optimal diet that will further drive the industry growth. Availability of advanced hospital infrastructure along with presence of major players will be the key factor influencing the U.S. market demand.

What are the forecasts for North America stents market size?
The North American market size for stents surpassed USD 2.7 billion in 2020 and is predicted to expand at over 0.3% CAGR from 2021 to 2027.
How much revenue will the self-expanding stents generate by 2027?
According to the analysts at Graphical Research, self-expanding stents segment revenue is poised to reach USD 1 billion by 2027.
Which are the key companies in the North American stents landscape?
Prominent players operating in the market are Abbott Laboratories, Boston Scientific Corporation and Medtronic.
Why did stents industry register high demand in the U.S.?
The U.S. market size was over USD 2.6 billion in 2020. Growing proportion of geriatric population in the country will have a positive impact on the regional market revenue.

Get this research report on North America Stents Market customized according to your business requirements.