Europe Stents Market size valued at USD 1.6 billion in 2020 and is anticipated to expand at a CAGR of more than 1.9% from 2021 to 2027. The growing demand for treatment of cardiovascular disease (CVD) in European region will propel the market growth. 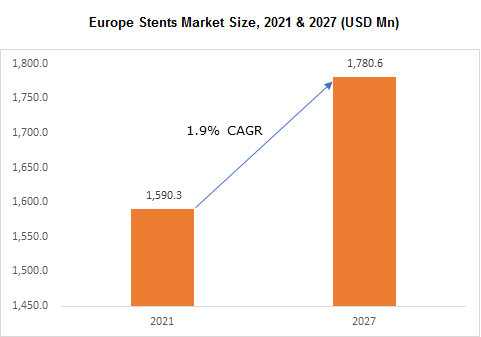 Additionally, rising geriatric population base are prone to various chronic disease such as peripheral vascular procedures and percutaneous coronary intervention. This is considered as one of the major factors that will drive the Europe stents industry. For instance, as per the Europe Statistics, more than one fifth (20.3%) of the European Union population was aged 65 and above in 2019. Thus, the usage of stent in patients suffering from various chronic disease will boost the market revenue.

Metal segment size was around USD 1.3 billion in 2020. Major factor that is driving the metal material stents is integration of metallic stents with biodegradable polymers, resulting to overcome the limitations of conventional. Furthermore, metal material stents are widely used in minimal invasive surgeries or procedures due to its lower rates of fracture, biocompatibility, and long-term integrity. Also, they reduce the incidence of abrupt vessel closure when compared to balloon angioplasty. This will decrease the rate of target lesion, augmenting the segment growth.

The vascular stents segment accounted for USD 1.4 billion in 2020 due to rising prevalence of disease burden in various countries of Europe. Moreover, coronary angioplasty is one of the widely used procedure in European member states. For instance, according to the European Union Statistics report, around 1.1 million transluminal angioplasty procedures were performed in EU member states in 2018.

Hospital segment held the European stents market share of more than 73.6% in 2020 led by availability of quality of post-operative care and skilled healthcare professionals. Also, hospitals are well equipped with advanced medical devices including stents, as they are the essential devices used for various surgeries and procedures. Thus, adoption of stents and increasing implementation in hospital setting will boost the segment growth. Furthermore, increase in hospital admissions will stimulate the demand for advanced treatment solutions that will offer growth opportunities for the market.

UK market for stents is expected to show lucrative growth of 1.5% during the forecast timeframe. Increasing rising geriatric population coupled with incidence of cardiovascular disease in the country will impel the market growth.

For instance, according to the British Heart Foundation, Coronary heart disease (CHD) is the most common type of heart and circulating disease in UK, accounting for 7.6 million individuals. Similarly, as per the Office of National Statistics (ONS) UK 2019 report, approximately 12 million UK residents were aged 65 years and older in 2018. Thus, the number involves various disease conditions and disorder including coronary heart disease. This will increase the usage of stents in such disease condition or procedures.

The European market size for stents valued at USD 1.6 billion in 2020 and is anticipated to expand at a CAGR of more than 1.9% from 2021 to 2027.
According to the analysts at Graphical Research, the UK market is expected to show lucrative growth of 1.5% during the forecast timeframe.
Major players operating in the stents market are Abbott Laboratories, Boston Scientific Corporation, Medtronic, Biotronik and Stryker Corporation.
The vascular stents segment accounted for USD 1.4 billion in 2020 due to rising prevalence of disease burden in various countries of Europe.
Customized Report  Request Free Sample
Inquiry Before Buying  Request Free Sample