Electrophysiology is a process to assess heart conditions through electrical system in order to diagnose abnormal heartbeats or arrythmia. This test is done by inserting catheters and wire electrodes to measure electrical activity by accessing blood vessels in the heart. 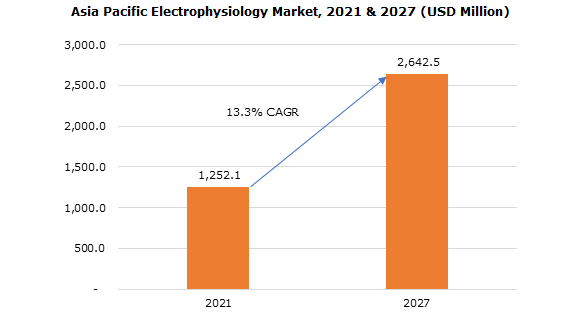 The COVID-19 outbreak has hindered the Asia Pacific electrophysiology market to a considerable extent owing to strict regulations and movement restrictions. The market has witnessed steep decline due to halt on several non-emergency procedures. However, electrophysiology market is anticipated to witness growth during analysis period with decrease in COVID-19 cases and risk associated with several cardiac conditions.

On the basis of end-use, electrophysiology market is segmented as hospitals, catheterization laboratories/EP laboratories and others. Hospitals held USD more than 500 million revenue size in 2020. Presence of sophisticated infrastructure and favorable reimbursement scenario in the hospitals will help to boost the segment size. In addition, the equipment in hospitals for screening and testing give greater precision in diagnosis and mapping of cardiac disorders and help provide guidance for further treatment. Such benefits increase patient preference for procedures in hospitals and thus create growth opportunities in the foreseeable future.

Japan electrophysiology market held over 22% market share in 2020. Presence of major industry players in the nation will influence market growth. Furthermore, presence of geriatric population pool, increasing prevalence of cardiac arrythmia and widespread presence of advanced products in the country impels the market potential. Moreover, increasing adoption of minimally invasive procedures will further impel the demand for electrophysiology procedures in Japan over the forecast years.

Few of the established major industry players involved in Asia Pacific electrophysiology market include GE Healthcare, Johnson & Johnson (Biosense Webster), Medtronic, Abbott Laboratories, Koninklijke Philips N.V., Boston Scientific and Siemens Healthcare among others. Market players are undertaking various strategies such as collaborations, and product introduction to enhance their market foothold. For instance, in May 2019, Osypka AG entered into strategic collaboration with Stereotaxis for the development of next-generation magnetic ablation catheter with integration of robotic technology of Stereotaxis. This has stimulated the growth potential of both the companies in the industry.

History of electrophysiology has been laid by Chinese scientists to study clinical electrophysiology and arrythmias in the 5th century. In the last ten years, electrophysiology has witnessed major developments favouring the adoption of electrophysiology procedures for treatment of cardiac arrythmias. Scientists introduced set forth learnings of electrophysiology and modern techniques to measure the bioelectrical signal. It helped in studying the electrical properties of biological tissues and cells through measurement of electrical current on variety of single-ion channel proteins to whole organs like heart. In 1971, Luigi Galvani, an Italian physician recorded the phenomenon of electrical signals while conducting an experiment on a frog. Electrophysiological studies, that started from frog muscle response research, extended the fundamental knowledge of nerve cells through squid axon membrane potential measurements using an electrode when Hodgkin and Huxley began this work in 1952. With the development of this measurement technique, Neher and Sakmann reduced the signal-to-noise ratio using a seamless seal between the cell membrane and the electrode, thereby establishing the foundation of the study of ion channels in the cell membrane. Thus, technological advancement and growing prevalence of cardiac arrythmias has escalated the research and development activities in this field leading to wide adoption of electrophysiology procedures.  Furthermore, with rapid innovations in ablation and mapping techniques, the market will witness commendable progress in the foreseeable future.

The market size of Asia Pacific Electrophysiology was valued USD 690 million in 2020.
The industry share of Asia Pacific Electrophysiology is projected to expand at 13.3% CAGR during 2021 to 2027.
Atrial fibrillation segment is forecasted to progress at 14.2% CAGR in the analysis timeframe. Increasing pervasiveness of atrial fibrillation as a result of aging population and risk factors including unhealthy lifestyle and eating habits will contribute to rapid segmental growth in the upcoming years.
Customized Report  Request Free Sample
Inquiry Before Buying  Request Free Sample