Electrophysiology (EP) is associated with the study of electrical properties of biological tissues and cells. EP test involves detection of abnormal cardiac activity by assessment of heart’s electrical system. It is widely used in diagnosis and management of cardiac arrhythmia to offer on-time treatment and minimize the incidence of sudden heart stroke. 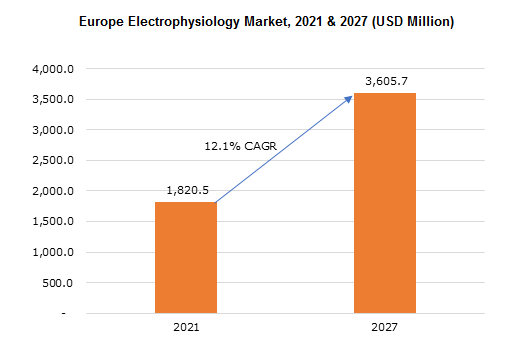 Incidence of COVID-19 has significantly impacted the electrophysiology procedural volume during the pandemic. With reduction in number of electrophysiology procedures, the demand for EP devices has also witnessed moderate negative impact. Several industry players operating in the market have experienced decline in segment revenues during the period as a result of restrictions on elective surgeries. However, with increasing demand post-pandemic with standardized procedures to ensure maximum safety, the market will continue to foresee considerable growth during forecast period.

Rapidly changing lifestyle and adoption of unhealthy habits has resulted into increasing disease burden and stimulated the electrophysiology procedural demand. Growing geriatric population has further contributed to disease burden. For instance, according to the European society of Cardiology, about 7.6 million population aged over 65 had atrial fibrillation in 2016 and is expected to increase by 89% till 2060. Moreover, increasing focus on development of advanced devices by companies will boost the industry growth potential. Therefore, with growing disease burden in the region and adoption of development activities by organizations will augment the Europe electrophysiology market growth in coming years.

Based on product, electrophysiology market is segmented as EP ablation catheters, EP diagnostic catheters and EP laboratory devices. EP ablation catheters sub-segmented into radiofrequency, cryoablation, laser and others. EP diagnostic catheters further classified as conventional, advanced and ultrasound. Furthermore, EP laboratory devices constitutes mapping systems, recording systems and others. EP ablation catheters held majority of revenue constituting over 45% market share in 2020. The segment growth is attributed to rising procedural demand over period. According to the European Society of Cardiology (ESC), over 290,000 catheter ablations were performed in 2016 across ESC area. Thus, product demand will increase with number of ablation procedures across the region and will positively impact the segment revenue growth in foreseeable future.

Based on end-use, electrophysiology market is segmented as hospitals, catherization laboratories, ambulatory surgical centers and others. Hospitals segment held significant market share in 2020 and will grow at 11.8% CAGR over forecast timeframe. Availability of sophisticated infrastructure with well-equipped facilities drives the patient preference for hospitals. Increasing hospitalizations for atrial fibrillation, ventricular tachycardia and other arrhythmias create demand for products in these facilities. Such factors segment will experience positive revenue growth in nearby future.

Germany electrophysiology market accounted for over USD 200 million revenue in 2020 and is expected to progress at robust rate over analysis period. As per the European Society of Cardiology, Germany is among the most active countries with more than 900 catheter ablations per million population. Also, risk of rhythm disorders among patients with COVID-19 will impact the market growth upto some extent. Moreover, rising healthcare spending coupled with substantial older population contributing to procedural demand in the country will propel the Germany electrophysiology market growth in foreseeable future.

Few of the established industry players involved in Europe electrophysiology market include Abbott Laboratories, Inc., Boston Scientific Corporation, GE Healthcare, Johnson and Johnson and Medtronic plc, among others. Market players are undertaking various strategies such as collaborations and product introduction to enhance their market foothold. For instance, in November 2020, Abbott announced the CE Mark and approval for its new EnSite X EP System, throughout Europe. The launch of new cardiac mapping platform broadens electrophysiology product portfolio and offers competitive edge to the firm.

Cardiac electrophysiology has been evolved since 1900’s. In early 1970’s the sophisticated diagnostic electrophysiologic technologies were developed to diagnose and guide drug treatment therapy for cardiac arrhythmias. Furthermore, during late 1970’s and 1980’s, developments were made for electrical mapping of arrhythmia and assistance in surgical ablation. However, due to mortality and morbidity associated with cardiac arrhythmia surgeries, it was replaced with radiofrequency catheter ablation in 1990’s. With further advancements and innovation in electrophysiology devices, several new technologies were launched. Focus on innovation of devices for electrophysiology procedures to offer effective intensive care for arrythmia patients will continue to augment the industry growth in forthcoming years.

Get this research report on Europe Electrophysiology Market customized according to your business requirements.