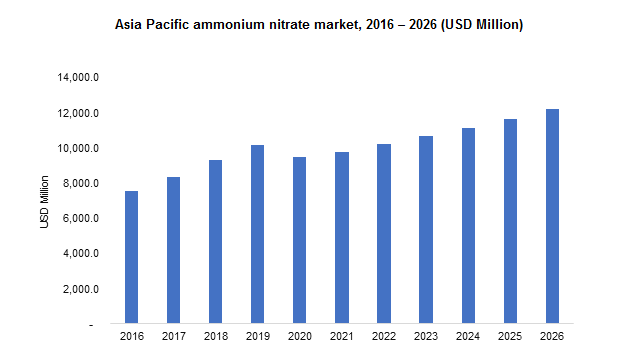 Asia Pacific market will grow at a significant rate primarily due to development in the regional agriculture sector. China and India are the largest producers of a wide range of agriculture products in the world. In 2019, agriculture production value in China accounted for around USD 1 trillion. Agriculture is primary livelihood of around 58% of the population in India. Gross Value Added (GVA) by agriculture, forestry and fishing in India was approximately USD 270 billion in 2019. In the same year, the country recorded food grain production of over 295 million tonnes, whereas the production of horticulture crops accounted for over 320 million metric tonnes. Agriculture export of the country exceeded USD 38 billion in FY 2019. India will witness a substantial growth in the agriculture sector owing to rising investments aiming towards upgrading agriculture infrastructure like warehousing, irrigation facilities, and storage. In 2019-2020, Government of India allocated around USD 28 million in Rainfed Area Development scheme of the Rashtriya Krishi Vikas Yojana, aiming towards improving quality of life of farmers by offering a complete package of activities to maximize farm returns. Moreover, government initiatives & programs to create awareness on the use of fertilizers among farmers will create demand for fertilizers in the region.

However, volatile raw material prices along with availability of substitutes might hinder the regional product usage in the region. The ongoing COVID-19 pandemic has resulted in the substantial disruption of the supply chain in the regional end-use industries, thereby negatively influencing the product demand in Asia Pacific. Temporary shutdown of manufacturing facilities, regulations imposed to restrict the mobility of people and restriction on international trades are some of the preventive measures taken by the government of major countries in the region, which has significantly impacted production and usage in the region.

Low density products will witness over 4% CAGR in Asia Pacific market as it is more porous compared to high density product. The product type is utilized as anti-caking coating and in the manufacturing of civil explosives, like ANFO, majorly used in the mining sector. The porous form aids in rapid absorption that enhance the explosive’s performance in the mining operations. LDAN is also used as porosity control agents.

Mining and quarrying will have significant share in the market. This is due to rising mining activities in the region, especially in China. China is the largest country to mine rare earth commodities. ANFO is extensively used as an explosive in the mining & quarrying industry due to its ease-of-application and lower cost. ANFO consists of around 95% of porous ammonium nitrate and around 5% of high-speed diesel. ANFO is a non-cap sensitive explosive and it requires large shockwaves to set it off. Bulk ANFO is used in the mining industry that can be mixed at the mining site near the borehole by a stationary mixer or a bulk truck. ANFO is a cost-effective blasting agents used for dry-hole blasting operation.

Get this research report on Asia Pacific Ammonium Nitrate Market customized according to your business requirements.