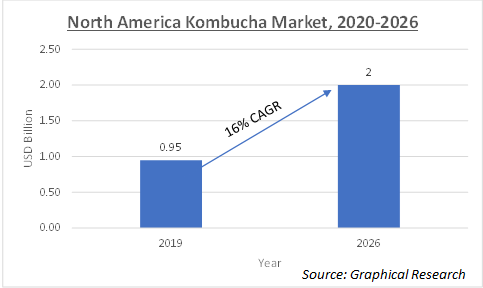 The North American kombucha market from organic kombucha segment will observe around 15% growth rate during the forecast period. In organic production, acetic acid is produced during the fermentation process with other acidic compounds, alcohol, and gases that make it carbonated a large number of bacteria also grow in the mixture, it contains several species of lactic acid bacteria which have a probiotic function. Kombucha includes organic acids like acetic acid, gluconic acid, glucuronic acid, citric acid, oxalic, pyruvic, malonic, sugars, vitamins & amino acids. Organic kombucha helps to maintain weight loss and helps to reduce risks of heart diseases, this will lead the market demand.

The flavored kombucha segment will exhibit a CAGR of 16.5% through 2026, owing to its popularity gaining attraction in the beverage industry.  Flavoring fermentation transforms tea into kombucha and carbonates. It is available in various flavors such as fruit, sugar, honey or table sugar & many more. fermented kombucha bottle must keep 3to 100 days, in the dark, and at room temperature for the fermentation process.

The herbs and spices segment will grow at 17% CAGR till 2026.  Herbs and species have a high content of essential oils.  Herbs such as decocts of black and green teas, winter savory, peppermint, wild thyme, elderberry, quince, and many more. it has antioxidant properties that help ease digestion and boosts the immune system. In addition, it boosts energy and helps in weight management. Also, it reduces high blood pressure and diabetic conditions.

Get this research report on North America Kombucha Market customized according to your business requirements.