Europe Coenzyme Q10 Market share was valued at above USD 60 million in 2019 and industry is expected to witness substantial gains at over 9.5% by 2026. 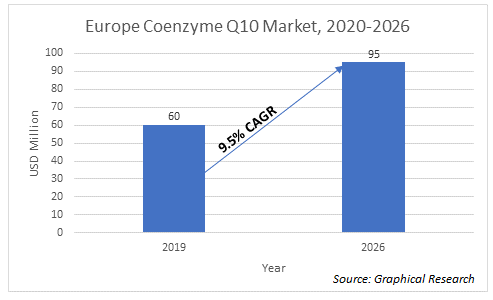 Coenzyme Q is generally known as ubiquinone, present in several animals and bacteria. Coenzyme Q10 is commonly found in human cells, it performs as a catalyst in the various reactions. Coenzymes perform several metabolic pathways such as the oxidative phosphorylation process in which cells used oxidative nutrients and release chemical energy to produce andesine triphosphate.  Also, it performs several biological metabolic activities like conversion of energy in carbohydrates and fatty acids into ATP molecules to boost the synthesis process. Owing to rising health benefits and application in several industries is likely to drive in Europe coenzymes market over the forecast period.

Based on the application the market is divided into pharmaceuticals, cosmetics, and dietary supplements. Coenzymes used as drugs in the pharmaceutical industry, Specially Q10 used to treat heart-related problems and congestive heart failures, high blood pressures, and heart cancers. Furthermore, it regulates energy metabolism activities and boosts the immunity system in the body. also, it is used to treat diseases such as mitochondrial cell disease, migraine attacks, diabetic conditions, and Parkinson’s disease. Owing to its extensive used in pharmaceuticals, the European market anticipated growing at a CAGR over 9.5% during the forecast period.

In European countries such as Germany, UK, Spain, and Italy the cosmetic and personal care industries have been well developed. Also, major players are present in this region will focusing on the development of cosmetic and wellness products. Coenzymes have a high content of antioxidant properties which helps to nourish the skin cells and improves blood circulation. Owing to this, it is used in various skincare products such as toners, gels, sunscreens, lotions, ointments, creams, and many more. Furthermore, coenzymes act as a vitamin E, which is used as an emulsifier and preservative agent in much cosmetic care and wellness products. The powder form coenzymes Q10 is used in the skin aging creams and face masks. Considering this the European coenzymes market from the cosmetic segment estimated to grow at a CAGR of 10% during the forecast timeframe.

Germany counted a market share of USD 14 million in 2019 and anticipated growth at a CAGR of over 9% by 2026 in terms of values. The growing use of cosmetic products and the presence of major manufactures in this region are a major factor which fosters the market demand in the predicted timespan.

Get this research report on Europe Coenzyme Q10 Market customized according to your business requirements.