North America Wi-Fi Chipset Market value was USD 4 billion in 2019 and shipments are expected to grow at a CAGR of over 7%. 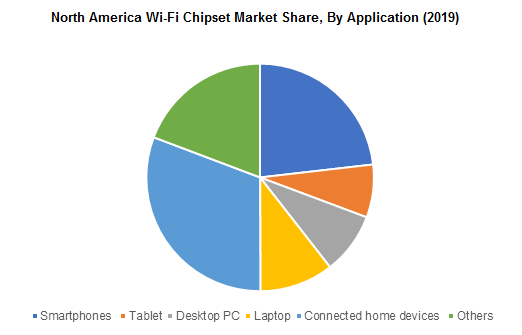 The IEEE 802.11ax (Wi-Fi 6 & Wi-Fi 6E) segment is anticipated to grow at a CAGR of over 20% over the forecast period. The market growth is credited to technological advancements in the sixth-generation Wi-Fi chips over the IEEE 802.11ax standard. The new standard enables Wi-Fi chipsets to transfer data over a 160 MHz channel at a 9.6 Gbps transmission speed. These features are increasing its adoption in high-end consumer electronic devices such as AR/VR, smartwatches, and smartphones, among others. In February 2020, Broadcom, Inc. introduced the industry’s first Wi-Fi 6E chipset over the IEEE 802.11ax standard, which has applications in low-power mobile devices and AR/VR applications.

The connected home devices revenue accounted for the market share of over 30% in 2019 and is projected to grow at a CAGR of over 6% by 2026. Growth is attributed to the rising trend of smart home automation in the North America residential sector. According to the January 2020 press release by Consumer Technology Association, around 69% of the total U.S. households are integrated with at least one connected home technology product in their households. The proliferation of connected home devices, such as service robots, wireless security systems, smart speakers, and smart TVs, among others, will fuel the market.

Canada is growing at a CAGR of 5% from 2020 to 2026 in the North America market. The growth is attributed to favorable government initiatives to support the wireless infrastructure development in the region. In October 2019, the Canadian Radio-television and Telecommunications Commission (CRTC) introduced the Broadband Fund, a government initiative, for the development of broadband internet and wireless infrastructure in Canada. Through this initiative, the government will invest approximately USD 575 million from 2020 to 2024. The initiative will increase the deployment of gateway devices, modems, routers, and broadband infrastructures adding new growth opportunities in the market.

Get this research report on North America Wi-Fi Chipset Market customized according to your business requirements.